Ireland boss Martin O'Neill has told his players to express themselves as he plots a route to the Euro 2016 finals.

Former manager Giovanni Trapattoni's conservatism saw them come up short as Ireland missed out on qualification for this summer's World Cup finals in Brazil.

O'Neill admits circumstances and opponents – they face a testing home friendly against Serbia on this evening - will dictate the extent to which he can take a more progressive approach, and he will not throw caution to the wind.

However, he wants his players to go about their task with the freedom to create chances.

"The onus is on us as the home side to come and attack. We would want to try to do that and naturally just have a freedom of expression too to a certain degree.

"Eventually, you would like to try to win the game if you can do that, so a combination of all those things is what we want to try to achieve.

"In terms of style and pattern of play, hopefully that will evolve between now and maybe September-time, but hopefully we will try a couple of things as well."

Central defender John O'Shea knows exactly how O'Neill works having played under him at Sunderland, and he insists there will be a balance to the manager's philosophy.

The 32-year-old said: "He wants the players to use their own naturally ability, natural instincts to go and attack players, to go and take people on in the right areas.

"Believe me, he is not telling people to take people on in our own 18-yard box. He wants to keep clean sheets. We know how important they are, especially coming up to a qualifying campaign.

"But the natural progression in terms of players expressing themselves will be a major part in a successful campaign because you need that explosion to create a goal, to cause teams damage, and that will be a big part in the campaign going forward."

O'Shea met up with his international team-mates on Monday afternoon, a day after seeing his hopes of Capital One Cup final glory shattered by Manchester City, and the chance to play another game so quickly afterwards is one he welcomes.

He said: "It was good to have this game coming up so quickly because the sooner the next game comes around after something like that, it gets the appetite going again to make sure you can get a chance to maybe go there again – and we will have that at club level after this international game too."

O'Shea, who is currently just six short of a century of caps, has signalled his intention to carry on playing for his country for as long as he can.

But when he was asked if Euro 2016 could represent his last chance to play in the finals of a major tournament at the age of 33, O'Neill interjected.

The manager said with a smile: "Are you 33? April this year? That's him finished. Somebody check what age Richard Keogh is." 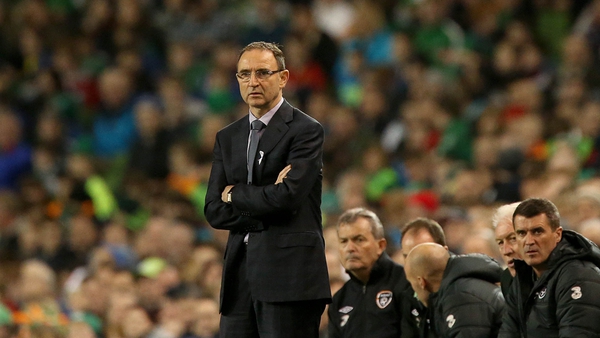