A bright start from cup holders Sligo, which saw Danny North scuff a shot wide, counted for little as St. Pat’s took the lead - for what would prove the winner - from Fahey’s sublime strike on 17 minutes.

A second successive corner from Killian Brennan was hooked away by Sligo’s Joseph Ndo. But the ball dropped perfectly for Fahey, whose right-foot volley from 25 yards found the top corner of Richard Brush’s net.

The strike prompted one Saints’ fan to holler "did you see that Martin?" to watching Ireland boss Martin O‘Neill and his assistant Roy Keane.

See it O’Neill did. "It was a fantastic goal - a really fantastic goal,” said the Ireland manager when asked at the interval. "I think he got a little bit irritated a minute or two before half-time when one of his players went in and had a shot when it was coming out to him.

"I think he was thinking about the double at that stage. But it was a great, great strike - a great goal."

Sligo were clearly unsettled by going behind as a defensive error almost gifted St. Pat’s a second on 23 minutes. A stray pass from left-back Danny Ledwith was  intercepted by the darting run of Chris Forrester, who pulled his shot wide.

Brennan then worked Brush in first half stoppage time with an audacious effort from some 40 yards.

The Saints had loud penalty appeals for a handball turned down three minutes into the second half when a shot from Byrne was blocked away by Jeff Henderson.

Sligo striker North almost forced a penalty shoot-out with a chance in stoppage time but he side-footed wide as St. Pat's held out to get their season off to a winning start.

Men of the match:
Keith Fahey (St. Patrick's Athletic):  As with the goal on his return to the club last month against Dundalk in the Leinster Senior Cup, Fahey struck yet another wonder goal which proved decisive.

Killian Brennan (St. Patrick's Athletic): If Fahey provided the gloss, Bennan was the stand out player in the middle of the park, almost capping his display with a goal in the second half. 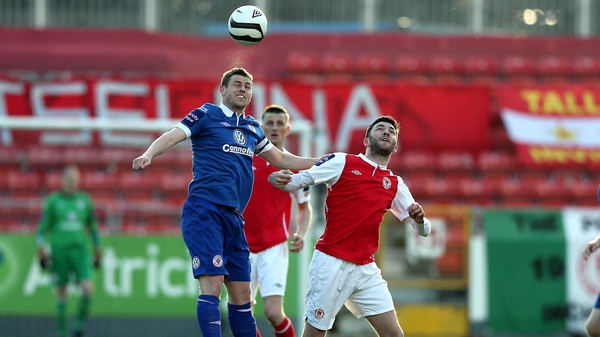