Oscar struck a match-winning free-kick as Chelsea celebrated a 1-0 FA Cup fourth-round victory over Stoke on their manager's 51st birthday.

Jose Mourinho's preferred number 10, the man he chose for the role ahead of the now-departed Juan Mata, fired Chelsea ahead with a delightful 28th-minute set-piece and hit a post before Andre Schurrle also hit the woodwork.

Chelsea struggled to kill off a stubborn Stoke side, despite the efforts of Oscar and Eden Hazard, and Samuel Eto'o spooned a glorious chance wide after Hazard's direct run and cross.

Chelsea will now go on play Manchester City in the Emirates stadium in the fifth round.

The slender advantage did not ease Mourinho's concern, with the Portuguese wary of the December Premier League clash at Stoke, when Oussama Assaidi scored a last-gasp winner.

But on this occasion Chelsea held on to take their place in the fifth round of the FA Cup, a trophy they have won in four of the last seven attempts, including in 2007 under Mourinho.

Following the sale of Mata to Manchester United, Chelsea recruited Mohamed Salah from Basle in a deal which Mourinho confirmed before kick-off had been completed.

Mata's frustrations became public when he expressed his exasperation when he was substituted for Oscar at Southampton on New Year's Day and Mourinho granted the World Cup winner his wish in sanctioning his exit.

Oscar, Hazard and Willian have been the attacking trio of choice this term, but Schurrle came in for the latter as one of five changes from the side which beat Manchester United last weekend.

Nemanja Matic made his second full debut after re-signing from Benfica and was a reassuring presence in deep midfield, slotting in seamlessly and allowing Frank Lampard to make forays forward.

Eto'o, buoyed by his hat-trick against United, came close in the opening skirmishes after turning in a tight spot and firing a shot which drifted narrowly wide.

Hazard was also lively and ran into an outstretched Wilson Palacios leg in the penalty area.

Referee Chris Foy turned away the Belgian's appeal for what would have been a soft penalty, but did not dole out a booking.

Hazard and Oscar were central to Chelsea's attacking work, while also tracking back as Mourinho's men defended as a team, a managerial demand Mata was unable to satisfy.

Mata was a set-piece specialist, but Oscar has inherited those duties and curled in a sublime free-kick for his ninth goal of the season.

From the right edge of the area, the Brazilian struck the ball right-footed and into the opposite corner past Asmir Begovic, who was returning following a broken finger.

Oscar then continued to illustrate Mourinho's faith in making him his attacking lynchpin by tracking back into deep midfield to thwart a promising Stoke counter-attack.

Another trait Mourinho likes is the aggression in English football, but he did not enjoy Stoke players taking their physical approach too far at times.

Hazard, on Chelsea's left, was a particular target, and, after Geoff Cameron was booked for one over-zealous challenge, switched flanks to escape.

From the right, Hazard crossed for Lampard, who was unable to convert on the slide.

Stoke stood firm and threatened on the counter, coming close when Stephen Ireland found space on the left of the area and shot into the side netting.

Oscar hit a post after ghosting through soon afterwards before Eto'o wriggled past Steven Nzonzi and Ryan Shawcross, but could not get a shot away.

Schurrle fired on to the angle of post and bar soon after the restart and Oscar curled narrowly wide after good build-up play from Ashley Cole and Schurrle.

As long as there was just one goal in it, Stoke were not finished and Jonathan Walters shot narrowly off target, Marco Arnautovic curled a free-kick wide and Ireland prodded straight at Mark Schwarzer when the ball did not drop for him.

Oscar and Hazard continued to be Chelsea's most-threatening players and the Brazilian shot at Begovic, while the Belgian's menacing cross was cleared.

Assaidi came on with 18 minutes remaining and with Chelsea still striving to finish the contest.

Begovic saved a Lampard drive from the edge of the area and was floundering on the floor when Eto'o contrived to slice wide after Hazard's run and cross fell to the striker with 13 minutes left.

Ramires went down on the right side of the box under the challenge of Erik Pieters, but again Foy said no penalty.

A foul by Pieters on Ramires earned Chelsea a free-kick and Begovic saved a David Luiz pile driver.

Chelsea could not get the second they sought, but Assaidi was unable to replicate his heroics as Stoke exited the tournament. 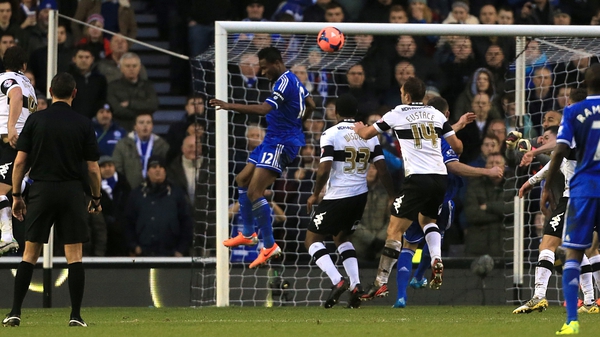