John Obi Mikel was an unlikely goalscorer to set Chelsea on their way to a 2-0 FA Cup third-round win at Derby which featured another diving incident.

The Rams had won 10 and lost just two of their previous 15 games under former England boss Steve McClaren and proved difficult for Jose Mourinho's men to break down at the iPro Stadium.

But Mikel headed in his fourth Chelsea goal on his 300th appearance after 66 minutes and Oscar added a second soon afterwards.

Chelsea's 16th successive third-round triumph – their last loss at this stage was in 1998 against Manchester United – set up a fourth-round tie at home to Stoke, but was tinged with controversy as Ramires was booked for diving by Andre Marriner.

Referee Marriner controversially awarded Chelsea a penalty in the home draw with West Brom in November, after Ramires went to ground under minimal contact from Steven Reid.

That decision saved Mourinho's unbeaten league home record at Chelsea, but there was no direct impact on the result on this occasion.

However the incident did place renewed doubt on Mourinho's claim that "there are no divers at Chelsea" following Oscar's booking in the New Year's Day win at Southampton.

Ashley Cole, making his third start in four games following a spell out of favour, cut out a Craig Forsyth cross towards Jamie Ward and Dawkins shot over on the turn as Derby started well, without testing Schwarzer.

Chelsea had a glorious opportunity to take the lead when Mikel fed Eto'o to go through one-on-one with Lee Grant.

But Eto'o failed to show the pace which helped to make him a prolific and feared striker at Barcelona and Inter Milan and Derby's defence were able to cover.

A slack pass from Luiz presented Ward with an opportunity to run at Chelsea which the Derby striker gleefully accepted.

Ward darted forward, but his shot was blocked by Gary Cahill, much to his defensive partner's relief.

Ramires and then Oscar, with a free-kick, fired narrowly wide for the Blues.

Oscar went close again after evading John Eustace in midfield before blasting a curling effort which went a yard wide.

Eustace had an effort on goal at the other end, but Schwarzer comfortably held County's first shot on target, before Oscar again tried his luck from the edge of the area at the other end with a shot which was always going over.

The Brazilian trio of Willian, Oscar and Ramires was Chelsea's greatest threat.

Willian found Ramires in first-half stoppage time and the latter made space to shoot left-footed against the foot of the post as the half ended goalless.

The second-half resumed with Jake Buxton clearing a dangerous cross by Oscar, who was found by Willian, as Eto'o lurked in the centre.

Ward curled a free-kick over and saw a deflected shot trickle towards Schwarzer soon after as Derby continued to press forward.

Mourinho had seen enough and introduced Hazard for Essien.

Mikel was handed the captain's armband on his landmark appearance as Ramires took Essien's place alongside him in defensive midfield.

Nine more minutes elapsed before the ineffective Eto'o was replaced by Torres with Mourinho's intent clear.

A replay was the last thing Mourinho wanted and his positive change was rewarded as Chelsea went ahead almost immediately.

The visitors were awarded a free-kick wide on the left and Willian curled the ball in for Mikel to head in at the near post.

Ramires was booked for diving when there was no contact from Michael Keane in the Derby box, before Chelsea claimed a second.

Oscar darted into the right side of the Derby box and unleashed a vicious shot which beat Grant at his near post.

Torres might have had a third after rounding Grant, but the ball became caught under the Spaniard's feet.

He immediately had a chance to make amends, but Grant was equal to the striker's shot across goal.

A Ramires shot deflected on to the crossbar as Chelsea threatened again entering the final 10 minutes.

Chris Martin forced Schwarzer into a sharp save but that was as good as it got for Derby as Chelsea advanced. 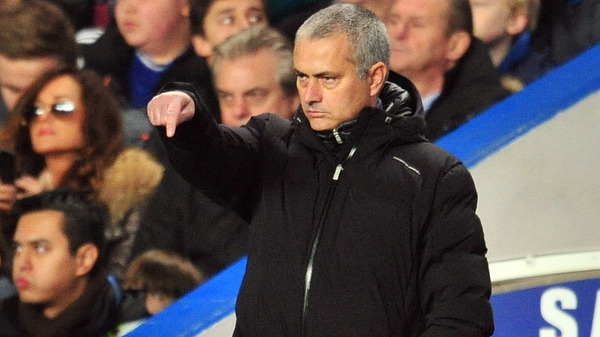 Jose Mourinho: No divers at Chelsea