Celtic romped through to the William Hill Scottish Cup fifth round with a 7-0 humiliation of Hearts at Tynecastle, handing the Edinburgh side their biggest defeat in 40 years.

The cup holders were knocked out of Europe with a 3-0 Champions League defeat to AC Milan at Parkhead on Tuesday night and they took their frustrations out on the Jambos to lead 5-0 at half-time with a Kris Commons brace and goals from skipper Scott Brown, Joe Ledley and Mikael Lustig.

A one-sided contest continued after the break as Commons completed his hat-trick in the 58th minute from the spot with Brown grabbing his second – and the Hoops' seventh – in the 74th minute with a volley from the edge of the box.

The holders will be the side everyone will want to avoid in Monday's draw for the next round while the Jambos, who lost 7-0 at home to rivals Hibernian in 1973, must lick their wounds and hope the thrashing does not have too much affect on their bid to stave off relegation from the Scottish Premiership.

Brown, fellow midfielders Nir Biton and Ledley and striker Anthony Stokes came into the Hoops side with Georgios Samaras and Derk Boerrigter dropping to the bench and injured James Forrest and Beram Kayal missing out altogether.

The Jambos showed one change from last week's 2-2 Scottish Premiership draw with Ross County as David Smith came in for Callum Tapping, who started among the substitutes.

Before the game there was a well-observed minute's silence for those who died as a result of the helicopter crash in Glasgow on Friday night with both teams wearing black armbands.

Unusually for the visit of the Parkhead side, Tynecastle was not full to capacity with big gaps in the home stands evident, and those Jambos who stayed away made a good decision.

The visitors began their dismantling of Hearts in the third minute with a well-worked goal.

Ledley played a one-two with Stokes before sliding the ball through to Commons who took a touch before confidently drilling it past Hearts keeper Jamie MacDonald and in off the far post.

The second goal came after defender Kevin McHattie bundled Brown to the ground 25 yards from goal.

A quickly-taken free-kick from Charlie Mulgrew sent Commons clear and he hammered an angled drive high past the flailing MacDonald.

The Hoops were up and running.

At the other end a Callum Paterson drive was saved by Celtic keeper Fraser Forster, but Commons was going for his hat-trick and in the 26th minute his delightful chip from the edge of the box was tipped over by the stretching MacDonald at the expense of a corner, which the home side defended.

However, the third goal was inevitable and came just after the half-hour mark when a long Mulgrew pass found Stokes who cleverly laid the ball off for the supporting Ledley.

The Wales midfielder's drive cannoned off the post via Jordan McGhee and out to Brown who had the easiest of tasks knocking it into an empty net.

The tie was over then but Celtic remained rampant.

Ledley helped himself to a goal in the 42nd minute when he finished off a sweeping move by knocking in a cross from right-back Mikael Lustig from close range.

The Sweden international got in on the act a minute later with a wonderful drive from 25 yards which beat MacDonald and crashed off the crossbar before bouncing over the line.

Celtic piled forward after the break and were awarded a penalty in the 57th minute when Hearts skipper Danny Wilson was adjudged by referee Willie Collum to have handled a Commons shot, and the Hoops forward completed his hat-trick by slamming the ball low past MacDonald.

Hearts were dispirited and demoralised when Brown drove in number seven from the edge of the penalty area after MacDonald had made a decent save from a low drive by Hoops substitute Teemu Pukki, on for Mulgrew.

The Hoops kept going as Hearts summoned what they had in their reserves to keep the score at seven, which they managed to do, albeit that consolation is miniscule. 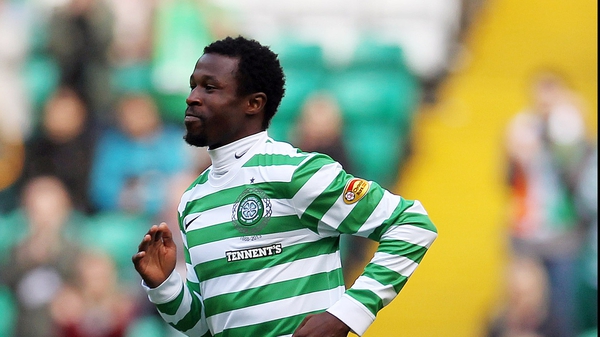