Efe Ambrose is looking for Celtic to shrug off their European hangover and resume work on the domestic double, starting with their defence of the Scottish Cup against Hearts at Tynecastle on Sunday.

The Hoops crashed out of the Champions League with an emphatic 3-0 defeat by AC Milan at Parkhead on Tuesday night.

Guaranteed to finish last in Group H ahead of their final fixture against Barcelona in the Nou Camp next month, there is not even the prospect of Europa League football after Christmas.

And Nigeria defender Ambrose believes Neil Lennon's men will be determined to get through their fourth-round clash with the Jambos as they seek to retain the trophy they won by beating Hibernian in the final at Hampden Park in May.

"There is no European football, so winning the cup and the league is the most important thing for us now," said the 25-year-old.

"We still have the cup to defend and the league title too, so the season keeps going.

"We start on Sunday to defend the cup and we hope to retain it. That is our aim now and maybe this can bring a little bit of joy to the club.

"There was disappointment (against Milan) on the night but not now, everyone is back to training and back to work.

"We have to accept what has happened and look forward to the next (European) campaign which is next season.

"We gave all we could and we are disappointed we could not go beyond the group stages but that is the reality.

"We now need to focus on what is ahead of us, and the cup and the league is the objective of the club."

Celtic reached the last 16 of the Champions League last season but Ambrose believes profligacy in front of goal has hampered the club this season.

The former FC Ashdod player said: "This year I think we have played better football and created chances but haven't taken them.

"Last year we took the chances, that is the difference.

"We need to improve on our scoring to get a better end product but we are still building and still trying to improve as a team and as a squad, and I believe in the next couple of years we will be better."

Ambrose was loathe to accept some stinging criticism levelled at the Hoops defence after their attempts at zonal marking gifted the Italian side two goals from set-pieces.

"That is what we have doing since I came here to Celtic," he said.

"We should stick with the zone marking, this is the way we have been playing and we never change it.

"Not working for us one night does not make us a bad team or a bad defence. I believe it just wasn't our night.

"It happens but I believe we will work harder and make sure we concentrate more the next time." 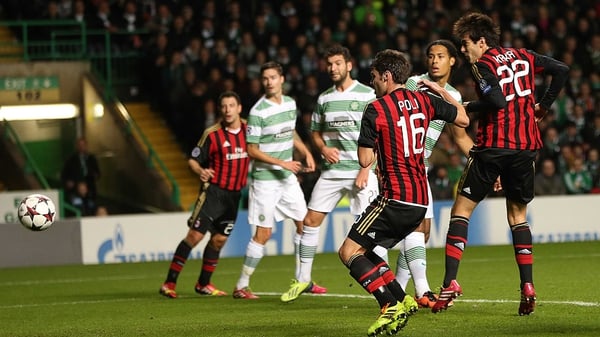