Wayne Rooney played a starring role as Manchester United recorded their biggest European away win since 1964 to book themselves a place in the Champions League knockout stages with a game to spare.

Rooney might not have got his name on the scoresheet in the 5-0 win against Bayer Leverkusen but the 28-year-old's name was stamped all over a classy display that must rank amongst the best David Moyes has enjoyed during his short tenure so far.

Rooney engineered the first four goals and was off the pitch when Nani scored United's fifth.

It was his cross that provided Antonio Valencia with a first half tap-in and Rooney who then curled over the free-kick that was headed into his own net by Emir Spahic as United took command before the break.

But the striker was not finished.

His close-range shot midway through the second period was too hot for Bernd Leno to hold, allowing Jonny Evans to finish off and then he lobbed a pass to Chris Smalling.

Nani completed the rout as United became the first English side to score four in Germany in this competition and record their biggest away triumph in Europe since a 6-1 demolition of Borussia Dortmund in the old Fairs Cup.

It was a result that made a mockery of Leverkusen's status as second only to Bayern Munich in the Bundesliga, the European champions the single team to escape the Bay Arena with so much as a draw prior to this one-sided affair.

Moyes can certainly be pleased with himself, although there is still a little bit of work to do against Shakhtar Donetsk at Old Trafford in a fortnight.

United will go into that game needing a point to secure top spot in Group A and avoid a nasty encounter with one of the competition's heavyweights in the spring, with Real Madrid, Barcelona, Bayern Munich, Atletico Madrid and Paris St Germain all lying in wait for an unsuspecting runner-up.

Unbeaten and through already, Moyes could not have asked for much more.

And on this occasion his game plan was carried out to perfection.

Moyes revealed before kick-off United's intention was to take the sting out of their hosts, who had failed to win on home soil only once this season.

With Shinji Kagawa revelling in a rare outing in his favoured position behind a main front-man, in this instance Rooney, and Ryan Giggs using all his experience to push exactly the right buttons when required just two days short of his 40th birthday, the visitors sucked Bayer in, then struck at rapid speed.

A decent block of Stefan Kiessling's effort by Evans was the prelude to United's opener.

The Japan man fed Giggs, who in turn pushed possession on to Rooney.

He dropped a marvellous cross beyond the line of Leverkusen defenders and Valencia, arriving with perfect timing, slotted home from barely a yard.

Leverkusen had not recovered from their disappointment before they fell further behind.

Kagawa won United a free-kick close to the edge of the area, which Rooney drafted into the space defenders hate, knowing if they do not make an attempt to clear the ball is likely to creep in at the far post.

Spahic jumped in the shadow of Chris Smalling, made contact but did not change the trajectory and United were two up.

Nani nearly increased the damage on the hour when he exchanged passes with Rooney but dragged his shot wide of the far post.

Rooney then came close to getting on the scoresheet himself when he skipped into space 20 yards out and curled a shot inches wide.

His overall contribution underlined why Moyes has no intention of telling his talisman to curb his aggressive instincts, even though they will occasionally get him into bother.

And pretty soon he had a third assist to his name as it was Rooney's close-range effort, saved by Bernd Leno, that rolled free for Evans to gleefully tap home from barely an inch.

Moyes opted to give Alexander Buttner a run out and save Patrice Evra's legs.

It did not stop United scoring though, with Rooney collecting yet another assist, after Kagawa had brilliantly picked him out in the box, Smalling finishing off the approach work this time.

The striker was replaced soon afterwards to save his legs for Sunday's trip to Spurs.

Nani decided it was time for him to make a contribution though to end the slaughter, the only occasion they have gone away and won by more than the five-goal margin was against Shamrock Rovers in 1957. 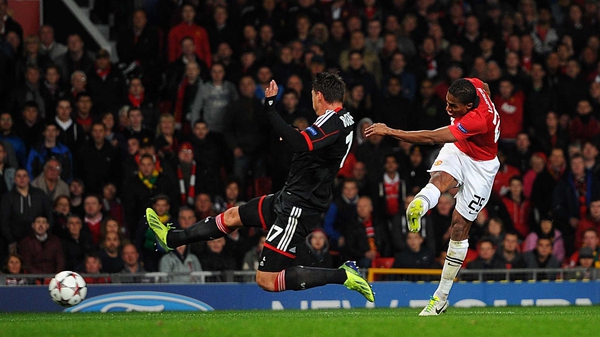