Martin O'Neill is confident the Republic of Ireland have the firepower to win games if they continue to be hard to beat.

The 61-year-old saw his team fight its way to a 0-0 friendly draw in Poland four days after launching his reign with an impressive 3-0 victory over Latvia.

Where flowing football was the order of the day against the Latvians, Ireland had to show their once traditional grit at the INEA Stadium in Poznan to keep Robert Lewandowski and his team-mates at bay, and that was a source of contentment for their manager.

O'Neill said: "International football is a wee bit like that these days, teams not running away with matches much.

"It would be nice to be hard to beat because you feel you would have enough ability to create something.

"[Aiden] McGeady in the final third has terrific feet and is a genuine danger. His own attacking instinct, he wants to think he can dribble himself out of any position on the park."

"The level of opposition was not in question. Poland are a wee bit unlucky not to be involved in play-off games" - Martin O'Neill

Poland represented a significant step up in class after Latvia, but Ireland took the game to them in the early stages and might even have gone ahead when defender Stephen Kelly saw a 21st-minute header loop up off the ground and over the bar.

But the Poles stepped up a gear as the game wore on and exerted sustained pressure, although keeper David Forde did not have a save of note to make.

O'Neill said: "That's true, and I should look at that as a positive. The level of opposition was not in question. Poland are a wee bit unlucky not to be involved in play-off games.

"It was tough and was always going to be. I made seven or eight changes, getting players into the fold and feeling they are part of it."

The manager, his assistant Roy Keane and their players flew back to Dublin in optimistic mood after a more than satisfactory first get-together, although they will not reconvene until March next year ahead of a home friendly against Serbia.

That is something to which O'Neill, who has spent the past 23 years working day-to-day in club management, will have to get used in between international breaks.

He said: "We will get back in the early hours and we are going to a hotel, and I won't see them for some time.

"I'll have withdrawal symptoms - I'm not so sure it will be the same for the players.

"I might be on the phone to them, but I'm not sure they are looking forward to that." 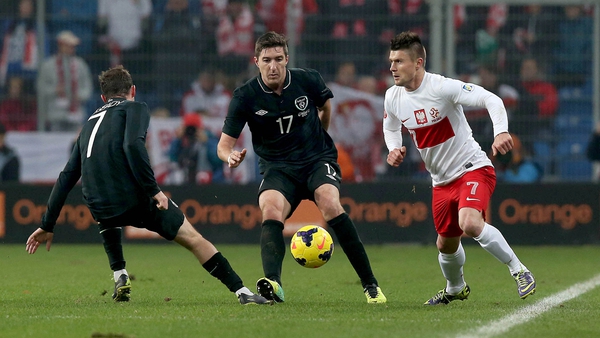