Martin O'Neill's first away fixture as Republic of Ireland manager ended in satisfactory fashion as his new charges claimed a 0-0 draw against Poland in Poznan.

A much-changed Ireland side gave as good as it got at the INEA Stadium, the site of Euro 2012 finals defeats by Croatia and Italy, in a hard-fought game which ended 0-0 despite the best efforts of both teams.

Defender Stephen Kelly went closest to winning it for the visitors with a first-half header, while Poland substitute Lukasz Teodorczyk blasted just over from distance in a rousing second half.

But ultimately, the spoils had to be shared, and that would no doubt have pleased O'Neill more than opposite number Adam Nawalka, whose side lost 2-0 to Slovakia in his first game at the helm on Friday evening.

By contrast, the Derryman opened his account at the earliest possible opportunity with a 3-0 friendly victory over Latvia, and the stalemate in Poznan simply maintained the positivity within the camp.

Where Ireland played with a freedom and genuine purpose against the Latvians, they had to be a little more circumspect against stronger opponents.

However, winger Aiden McGeady, who starred in Dublin on Friday, proved similarly influential during his 62 minutes on the pitch, and there were flashes too from Celtic striker Anthony Stokes as he attempts belatedly to make his mark at international level. 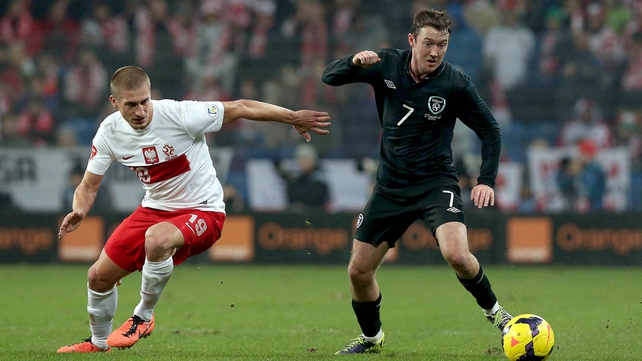 But perhaps just as pleasing for O'Neill, the defensive solidity which characterised the early years of Giovanni Trapattoni's reign was in evidence once again despite changes at the back.

The frustration now for O'Neill and assistant Roy Keane is they will not see their players again until March, when Ireland are scheduled to meet Serbia in a friendly.

O'Neill revealed after Friday evening's game that he would use the trip to Poland to assess the depth of his squad, and he was as good as his word as he retained only four of the men who started at the Aviva Stadium.

One of them, McGeady, picked up where he had left off, running at the Polish defence in the early stages to pin the home side back.

The Spartak Moscow winger forced Piotr Celeban into an eighth-minute block which left the defender winded, and as front two Shane Long and Stokes made their presence felt, Ireland had marginally the better of the early stages.

They might have gone ahead with 21 minutes gone when, not for the first time, a set-piece almost paid dividends.

Walters, wearing the captain's armband in the absence of the rested Robbie Keane, flicked on McGeady's corner and found Kelly unmarked in front of goal.

However, the full-back was unable to react quickly enough and although he managed to head the ball down, it reared up off the turf and looped over keeper Wojciech Szczesny's crossbar.

Poland had caused few problems for the visitors up to that point, but they stepped up a gear as the half progresses with star men Lewandowski and Jakub Blaszczykowski starting to make an impact. 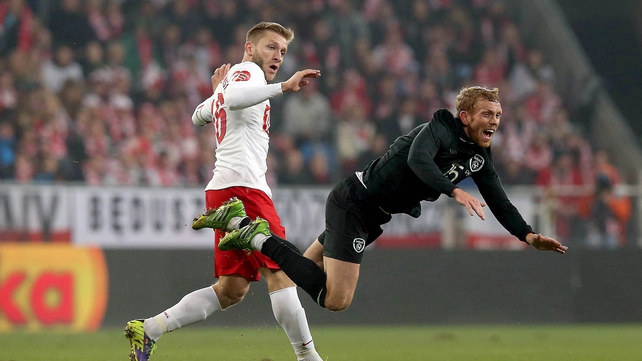 However, Ireland largely managed to contain the tricky Lewandowski, although substitute John O'Shea - he had replaced the injured Sean St Ledger after just 31 minutes - was booked for deliberate handball after being caught out by the striker.

Blaszczykowski very nearly got the second half off to the perfect start for the Poles when he carved his way between Kelly and midfielder James McCarthy and into the penalty area, and he might have gone all the way had O'Shea not intervened at the decisive moment.

An off-balance Long skied a 51st-minute left-foot effort high over at the other end and Walters saw an ambitious attempt blocked by Marciniak two minutes later as Ireland responded.

Szczesny had to make a smart save on the hour to keep out Stokes' well-struck effort after he had been picked out by McGeady, who departed soon afterwards along with McCarthy as defender Alex Pearce and James McClean joined the fray.

The Wigan winger needed just six minutes to make an impression with a teasing cross to which neither Long nor Stokes could get a touch in front of goal.

But fellow substitute Teodorczyk whistled a speculative effort over Forde's bar seconds later with the game starting to open up.

Poland piled on the pressure as time ran down, but Forde had few saves of note to make with the men in front of him battling admirably to secure a shut-out.