Andre Villas-Boas believes Tottenham have a far better chance of going on a cup run this season.

The Spurs manager put a lot of emphasis on trying to win the Europa League last term and, as a result, his team suffered an early exit to Leeds in the FA Cup and a fourth-round knockout by Norwich in the Capital One Cup.

But with over £100million invested in seven new signings this summer, the Portuguese believes it could be a very different story for Spurs in the cups this season.

Speaking ahead of tonight's League Cup fourth-round clash against Hull at White Hart Lane, Villas-Boas said: "We will introduce changes, but the difference this season is that we have the quality available to throw in a very good team.

"We will definitely do lots of changes because the schedule has been quite tight. We will have played Thursday, Sunday and Wednesday.

"We want to continue to do well and we have a responsibility at home to go through.

"We have the team to do it so naturally the changes will happen."

Erik Lamela has struggled to impress since his £30million move from Roma, but he will get another chance to make an impression with a rare start.

Gylfi Sigurdsson and Nacer Chadli are expected to get a run out while Brad Friedel is likely to replace Hugo Lloris in goal.

Villas-Boas also has a selection dilemma up front. Jermain Defoe has scored eight goals in the cup competitions this term, but Roberto Soldado is short of goals from open play and could play alongside the England international if Villas-Boas decides to ditch the 4-2-3-1 formation he has deployed all season.

Another intriguing proposition would be starting Emmanuel Adebayor alongside Defoe.

Adebayor fell out of favour with Villas-Boas over the summer. The Togo striker was told he could leave, and he was then ordered to train with the development squad.

The former Arsenal striker, who had an extended period of compassionate leave this summer due to the death of his brother, was back on the bench for Tottenham's Europa League game in Moldova last week, though, and could feature against the Tigers.

The game will give Villas-Boas a chance to gauge reaction to his criticism of the Tottenham fans who watched their team struggle to a 1-0 win over Hull in the Barclays Premier League on Sunday.

Villas-Boas said both he and the players were unhappy about the "negative" atmosphere which he thinks made it feel like Spurs were the away team at White Hart Lane.

Reaction to Villas-Boas' outburst in internet forums so far has been mixed.

Some supporters claim Spurs need to start playing more attractive football if they are to get more vocal backing at White Hart Lane, while others agree with the manager, and have called on the fans to increase the volume for the fourth-round game, which is close to a sell-out. 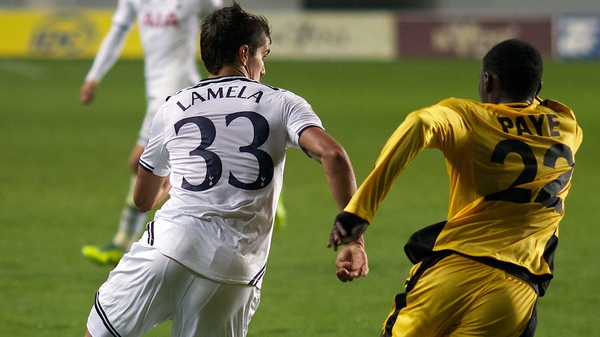