Republic of Ireland manager Giovanni Trapattoni and assistant Marco Tardelli have had their contracts with the Football Association of Ireland ended by mutual consent.

The Italian duo’s departure came after what the FAI described as an “amicable” meeting this morning.

Ireland suffered their second successive defeat in Vienna last night. A late goal from David Alaba gave Austria a 1-0 victory and put the future of the 74-year-old in greater doubt, with the prospect of qualification for the 2014 World Cup in Brazil now only a highly remote mathematical possibility.

“I want to thank everyone in Ireland who has given us their support during our time here which has always meant a lot to us,” Trapattoni said in a statement released this morning via the FAI.

"We leave this country with emotion because we understand the Irish supporters who have a well-deserved international reputation and they have our utmost respect."

He continued: "I would like to thank [FAI chief executive] John Delaney, [president] Paddy McCaul, [honorary secretary] Michael Cody and the FAI Board for their support and friendship over the last five and a half years.

"I would also want to thank all FAI staff members, including the backroom team and the players, who have been great to work with during the last three campaigns.

"I wish them well in the future and hope that the job we have done leaves everything in a good place for my successor to take over."

Delaney acknowledged that the current World Cup qualifying campaign had been unsatisfactory, but highlighted the earlier achievements of the veteran Italian manager.

“We thank Giovanni Trapattoni, Marco Tardelli and Franco (sic: Fausto) Rossi for the last five and a half years during which we qualified for our first major tournament in ten years and were close to qualification for 2010 World Cup in South Africa after the play-off in France,” the FAI supremo said.

“This particular World Cup campaign has been disappointing, but Giovanni leaves us with a group of good young players which should form the basis of the squad that the new manager will use for the European Championships in France 2016 when 24 teams qualify.”

The FAI acted quickly in the aftermath of the defeat in Vienna, cancelling a scheduled Trapattoni news conference in Dublin this afternoon and the board says it will meet in due course to consider a replacement.

Steve Staunton, who won 102 caps for Ireland before managing the side during the Euro 2008 qualifying campaign said he had seen Trapattoni's exit coming.

"I'm not really that surprised after the two results we had because we all knew this month was crucial for qualification," Staunton said on Sky Sports News.

"We were never going to qualify automatically, but I think everybody had hope and vision that we would come second and get a play-off, and it's a bit of a lottery then, but that's not going to be the case."

"Expectations have to be managed and controlled but sometimes they are unrealistic. Unfortunately things didn't work out. The criticism is coming from the tactics this time.

"But you can only work with the players you've got and unfortunately our players at this moment in time - we haven't got the biggest pool in the world." 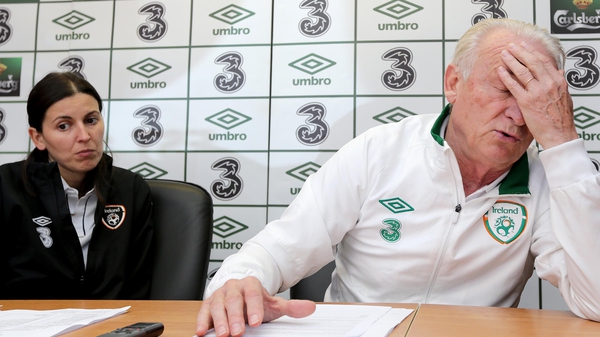