Former Portugal and Benfica striker Eusebio is set to be released from a Polish hospital later this week after falling ill a few days ago.

The 70-year-old complained of feeling unwell in Opalenica, where he was accompanying the Portugal squad during their Euro 2012 campaign.

Eusebio, who underwent a heart operation in his homeland five years ago to prevent a possible stroke, was admitted to a hospital in Poznan on Sunday but his health has since improved.

"The patient's status, from the cardiological point of view is good and he's slowly regaining health but it's not strong enough to let him leave today," spokesman Andrzej Rusek told local agency PAP.

Eusebio was treated for bronchial pneumonia last December and has been admitted to hospital several times since.

He was seen in the stands alongside former Portugal captain Luis Figo on Thursday enjoying the team's 1-0 quarter-final victory over Czech Republic.

Eusebio played for nine clubs in a 22-year professional career but it was at Benfica where he forged his reputation as one of the game's greats, turning out for the club 614 times between 1960 and 1975 and scoring an astonishing 638 goals.

During his time at Benfica Eusebio won 11 Portuguese league titles, five Portuguese Cup titles and the European Cup in 1962.

Despite being born in Mozambique, he was eligible to play only for Portugal as his homeland was a dependency of the European nation. 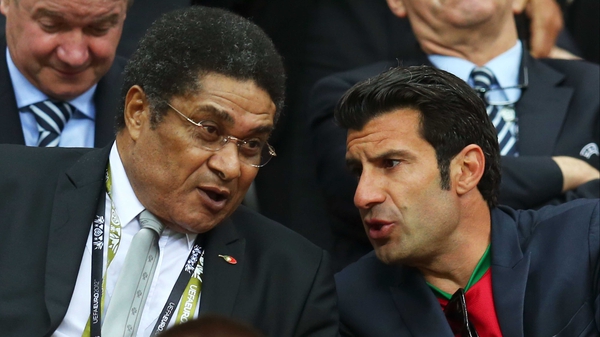