The Streets of New York, Streets of London, Streets of Philadelphia. It’s a songwriter template – pick a city and pen a ditty.

I’m not sure if there is a song call the Streets of Lviv, but if there is, the verse about the actual streets might be more suited to a heavy metal mosh, rather than a fairytale folk song.

The cobblestone streets throughout this old city have had tramlines wedged into them, and the result over the decades has made the city look like it has been hit by an earthquake.

Cars, buses, lorries and trams battle for the level ground which will do the least damage to your vehicle – one car lost its spare tyre from all the bouncing – while the more savvy drivers try to keep one wheel on the tram track while careering at pace towards the slightest gap in the traffic to maintain the forward momentum. Once inside the city’s Old Town, however, Lviv’s former glories become apparent as you cast your eyes upwards, and it’s not difficult to imagine how this once fine town was often referred to as the Florence of the east.

The city is young and vibrant, while the very central EURO 2012 FanZone stretches the length of the town square creating an amazing buzz about the place, particularly on match-day, attracting huge numbers into the city and filling all adjacent streets.

Ukraine’s time zone has ensured that the earliest a game kicks off is 7.00pm, while the later kick-off doesn’t commence until 9:45pm. These night-time starts have proved very successful in the host cities as it allows fans of both sides to mingle and enjoy the afternoon atmosphere ahead of the trip to the stadium. It certainly helped the Lviv economy keeping the fans in the city centre for the build-up, as the journey out to the stadium is a bit of a trek.

The Arena Lviv is located about six miles outside the city, taking the best part of an hour to reach by bus. There is little or nothing around the stadium so supporters leave it late to exit the city centre.

But once inside the stadium you get a real sense of excitement as the compact 30,000 seater stadium (the smallest in the tournament) offers everyone a bird’s eye view of the action, thanks to the absence of a running track and the clever stadium design making you feel like you are right on top of the action.

Portugal and Denmark rose to the occasion, providing a five-goal thriller, and while Cristiano Ronaldo had to be bailed out on this occasion by his team-mates, there was moments of pure class that makes it a joy to watch such talent in the ideal surrounding.

And while the Irish fans were picking up Polish plaudits, the Danish supporters have been equally impressive turning up in huge numbers to cheer on their side.

Finishing the stadium was probably high priority in Lviv to the detriment of the surrounding infrastructure, which really became evident after the game when traffic gridlock kicked in. It was quite a while before we reached the hotel that evening.

Another five o’clock in the morning start and it was off to Donetsk via Kiev.

Arriving into Kiev just after 8.00am, there was the small matter of passing the best part of eight hours before we flew on to our next destination.

If anyone ever needs any information about Kiev Airport, feel free to drop me a line, because that ‘longest day’ allowed me to explore every nook and cranny of both terminals – a ramble over to the ‘exciting’ international terminal proved uninspiring – and also resulted in the consumption of a lot of overpriced, averagely adequate, airport appetisers.

Donetsk was one of those places that I had ignorantly reasoned I could do without visiting, writing it off as a bleak mining town with nothing of interest to see or do.

And not for the first time on my travels, I was proved completely wrong.

Pulling into the Shaktar Plaza in downtown Donetsk with temperatures hitting 30 degrees and jaded tired from the day in Kiev airport, it seemed like a I was experiencing a mirage.

Now it would be a bit of an understatement to say that the quality of hotel thus far in Ukraine had been, at best, fair to middling.

But sitting here in the late afternoon shadow of the newly built Donbass Arena, the Plaza was everything you could want from a hotel when you’re on the road and living out of a suitcase for two weeks.

And it seemed the perfect place to enjoy Ireland’s renaissance at the tournament as we settled down to watch Trap’s selection take on world champions Spain.

Another disappointing night and a performance that lacked any quality or conviction as the Irish crashed out of the tournament.

The game reminded me of my World Cup journey through Japan and Korea ten years previous when Ireland played Spain off the park and narrowly failed to make the quarter-finals, losing on a penalty shoot-out. So it really is amazing to see the direction that both sides have taken in the intervening period. Someone in Irish football needs to hold their hand up. Any takers?

But the show must go on. And what a show the following night at the brand spanking new home of Ukraine champions Shaktar Donetsk.

Breakfast at the palatial Plaza was as good as I had assumed it would be; the stacked-full plate of fresh fruit very well received by my vitamin-starved body.

An afternoon ramble around the air-conditioned shopping malls in the city centre was enjoyed, before heading across the hotel concourse to the stadium.

Still four hours before kick-off and nothing but blue skies and sweltering temperatures to contend with.

Another fantastic football stadium greeted me as I was welcomed into the heart of the orange and black clad arena, this time 60,000 seats and again the joy of not seeing a running track around the pitch’s periphery.

‘What part of Ireland are you from?’ came an American accent to my right as I stocked up on water and match facts in the media zone. The twang was certainly American but the face definitely Irish. The voice turned out to be Kilkenny hurling legend Henry Shefflin's American cousin Andrea Morley who is working for the Peace Corp in Ukraine and volunteering at EURO 2012.

Andrea, whose mother’s family are the Durneys, was born in Waterford but had moved to Florida, and it was gas to hear an American accent discussing the Waterford-Kilkenny rivalry that divides her family when it comes to Championship hurling.

She says hello, Henry, by the way, and I think she might be looking for a few tickets in September.

She says hello, Henry, by the way, and I think she might be looking for a few tickets in September.

So on to the main event, and having watched host nation Ukraine’s opener in Kiev, it was Donetsk’s first look at their side, and the atmosphere had been building throughout the city and now inside the stadium hours ahead of kick-off.

France were the opposition and after beating the Swedish in the opening encounter, another victory would send Ukraine through to the quarterfinals.

The bright blue above disappeared in the hour ahead of kick-off as a sinister sky surrounded the stadium, while the rain’s arrival coincided with the teams appearing from the tunnel below.

Both sides lined up and I was just a tad excited to hear the rousing French anthem, La Marseillaise, in such a fitting environment.

And it appeared that the gods were equally eager as a deafening clatter of thunder interrupted the anthem and made everyone inside the stadium jump in unison. Even the French team were visibly shocked by the untimely arrival.

Only four minutes of football could be played before the referee called the players off the pitch for safety reasons. Within minutes the pitch was flooded, as was our commentary position and it was looking like the game would now have to be replayed the following day, which would have been a first for the European championships.

It might have been a bit selfish from my point of view but I couldn't help getting slightly excited at the prospect of spending another night at the welcoming Plaza across the road. 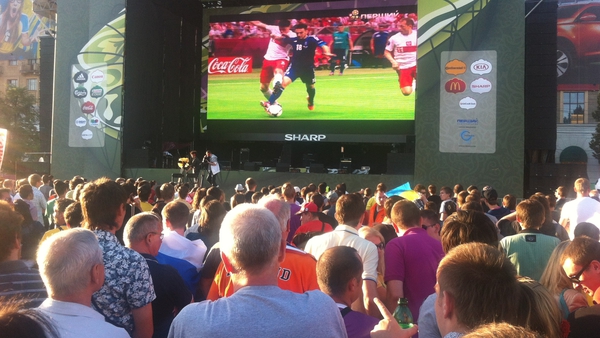