Bolton came from behind to claim a vital victory 3-2 at Molineux and leave rock-bottom Wolves seemingly staring relegation in the face.

After dominating the first half without managing to convert, the hosts deservedly broke the deadlock in the 53rd minute through the lively Michael Kightly, but they subsequently imploded.

The result - Bolton's third win on the bounce against fellow strugglers after their league triumphs over QPR and Blackburn - means the Trotters move up a place to 16th in the Barclays Premier League, a point clear of the drop zone.

The picture is more bleak for Wolves, who are now six points adrift of safety at the foot of the table and have taken only one point from a possible 18 under manager Terry Connor, suffering five losses in a row.

The midlands outfit's remaining home matches are against Arsenal, Manchester City and Everton and Connor's predecessor Mick McCarthy had described this contest as a "must-win" game.

Win they did not - although for long periods it seemed as if this was destined to be Connor's first victory.

Wolves made a positive start, with Kightly looking a threat down the right flank and a couple of corners causing panic in the Bolton box.

Kightly then lofted a free-kick forward which Steven Fletcher did well to keep in and the ball came to Sylvan Ebanks-Blake, who brought a save out of Adam Bogdan with a snap-shot.

The Trotters served a warning at the other end, Petrov seeing an effort blocked by Richard Stearman and miscuing an attempted volley moments later, but the hosts were soon back on the offensive as Fletcher headed Jarvis' corner wide before Ebanks-Blake drilled off target from distance.

Bolton forward David Ngog sent a shot harmlessly wide just prior to the half hour mark and there was a nervier moment for Wolves soon after as Petrov just cleared the crossbar having cleverly flicked the ball over Roger Johnson.
Bogdan then did brilliantly to claw away Fletcher's header, but the hosts were looking vulnerable at the back and after Trotters striker Ivan Klasnic was allowed to get a shot away, Wolves skipper Johnson and goalkeeper Wayne Hennessey squared up to each other.

Referee Jon Moss did his best to calm the pair down and within moments, Fletcher had come close to scoring again, the Scotland international's header being cleared off the line by Ryo Miyaichi.

Fletcher then had another near miss just before the interval as he nodded Kightly's cross against the bar.

Wolves looked to pick up where they left off as the second half got under way and Johnson produced a header which was easily caught by Bogdan, but they then survived a scare as David Wheater glanced Miyaichi's cross just the wrong side of the post.

The hosts' dominance finally paid off eight minutes after the restart as Kightly received the ball from Ebanks-Blake, darted past Alonso and arrowed a shot beyond Bogdan into the corner of the net.

The home supporters breathed a sigh of relief, but within 10 minutes, Bolton had equalised as ex-Wolves man Mark Davies went down after being challenged by Johnson in the box and Petrov buried the resulting spot-kick.

As part of his celebration, the Bulgarian revealed a t-shirt displaying a message of support for his compatriot and namesake Stiliyan, the Aston Villa captain who has been diagnosed with acute leukaemia.

The Trotters wide man then almost added another, unleashing a stinging drive that Hennessey managed to save, and struck a free-kick at the goalkeeper moments later.

With just under 15 minutes to go, Jarvis blew a chance to put his side back in front by heading wide when he should have done better, and it proved costly.

Bolton then swiftly extended their lead as one substitute Chris Eagles had the space to find Kevin Davies who slotted past Hennessey.

Jarvis gave Wolves hope by pulling one back two minutes from time but it was too little too late. 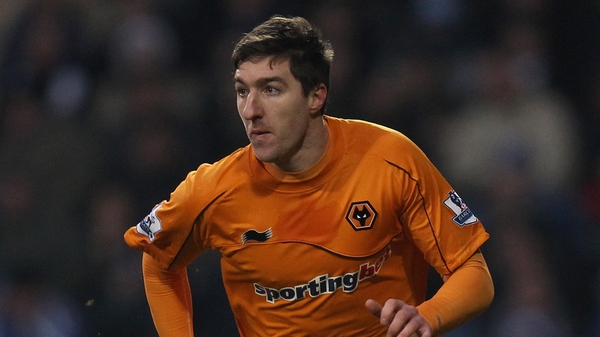