Russia withstood a late onslaught from the Republic of Ireland to claim a crucial 3-2 victory in their Euro 2012 qualifier at the Aviva Stadium in Dublin on Friday night.

The visitors led through first-half goals from Alexander Kerzhakov and Alan Dzagoev, as well as a deflected strike from Roman Shirokov.

Ireland responded through Robbie Keane's penalty and a close-range effort from Shane Long, but Russia held on despite pressure from the home side in the final ten minutes.

The Boys in Green were outplayed for much of the match but all is not lost as there are enough games left in the group to right this wrong.

However, confidence will have taken a hit and will need to be restored before Tuesday's crucial tie against Slovakia in Zilina.

Slovakia's defeat to Armenia earlier in the day had left the door open for these sides.

With 20 minutes remaining Russia appeared to be coasting to an easy victory after subduing a previously vociferous home crowd.

Russia manager Dick Advocaat had sounded a warning to Ireland that his side would hurt them if they stood off. Unfortunately for the home fans, that view proved wide of the mark for the first hour.

Advocaat had sprung something of a surprise by opting for Kerzhakov to lead the attack in place of Pavel Pogrebynak, but the Zenit St Petersburg man was to repay his manager's faith in him.

It looked good for Ireland as they began brightly, creating several chances in the one attack after Igor Akinfeev parried Aiden McGeady's shot.

Keane's follow-up cross clipped the bar with Kevin Doyle lurking, McGeady then had a penalty appeal turned down, before ending the action with a low shot that flashed across goal.

Kerzhakov opened the scoring for the visitors on 11 minutes with a goal that will have angered Giovanni Trapattoni.

Ireland failed to clear Andrei Arshavin's low free-kick to the front post. Sergey Ignashevich flicked the ball across goal, where Kerzhakov was able to fire home, despite the presence of three Irish players on the line.

In a pulsating and entertaining encounter, Russian tried to exploit their pace on the counter-attack as Ireland went searching for an equaliser.

Given could only push away an Igor Denisov shot and Kevin Kilbane completed the clearance. John O'Shea almost turned the resulting corner from Dzagoev into his own net.

Ireland were rattled when Dzagoev doubled the lead with a goal of real class just before the half hour. Kerzhakov dummied Alexander Anyukov's cross from the right and the ball fell perfectly for Dzagoev to beat Given.

Minutes later, Sean St Ledger was lucky to stay on the field for a hefty challenge on Dzagoev that could have yielded a red card.

Russia were more comfortable on the ball and passed with ease through Ireland's midfield.

Yet Ireland could have got back into the game if they had taken two chances that came their way late in the half.

Akinfeev easily saved Doyle's tame effort after the striker had made space for the shot.

Keane then failed to pick out his team-mate from the byline after skipping past Yuri Zhirkov.

Ireland were fortunate that Anyukov did not put Russia further ahead after a mix-up between Paul Green and Kilbane soon after the restart. However, that reprieve was short-lived.

Shirokov's shot struck the shin of Dunne and whipped past Given. Even more galling for Ireland was that replays showed the shot was off-target.

At the other end, Akinfeev did offer Ireland some hope with less than convincing saves from McGeady and Glenn Whelan.

With the situation looking desperate for Ireland, Giovanni Trapattoni made a bold move by introducing striker Shane Long for Liam Lawrence.

The second half also saw the introduction of Darron Gibson and Keith Fahey as Trapattoni sought to quell Russia's midfield superiority.

Keane gave Ireland a lifeline when he earned a penalty after minimal contact from Zhirkov. The captain sent Akinfeev the wrong way for his 45th international goal. The crowd roared back to life.

Lansdowne Road was rocking when Long reduced the deficit once again on 78 minutes.

Akinfeev did well to keep out another effort from McGeady, but Long was on hand to force home the rebound.

Ireland pushed hard for the equaliser and there were some hair-raising moments at both ends, notably when substitute Pogrebynak missed the proverbial sitter in injury-time.

Ireland remain top of Group B on goal difference but will need to produce better football if they are to be there when the campaign ends. 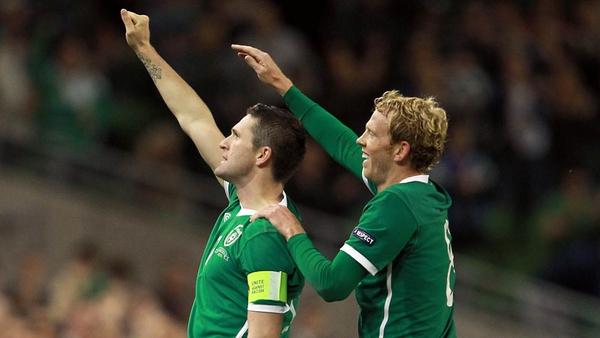