Robbie Keane fired himself back on to the goal trail as the Republic of Ireland eased past Andorra to complete a perfect start to their Euro 2012 campaign.

The 30-year-old insisted during the run-up to the first competitive game at the Aviva Stadium that he would not dwell on an uncharacteristically unproductive trip to Armenia last week, and he was as good as his word to extend his national record tally to 44 on his 102nd appearance.

Another centurion, Kevin Kilbane, had started the ball rolling with a 14th-minute header, and the Republic were cruising when Kevin Doyle blasted home a superb second five minutes before half-time.

Andorra, who had taken a shock lead on their last visit to the then Lansdowne Road back in 2001, hit back through midfielder Christian Martinez during the dying seconds of the first half to cause consternation in Dublin.

However, Keane restored his side's two-goal advantage within nine minutes of the restart, and it was plain sailing from there.

The margin of victory may not have been wide enough for some among a crowd of 40,283, but six points from a possible six on a night when Group B favourites Russia had earlier lost at home to Slovakia represented mission accomplished.

And there was also the welcome sight of winger Aiden McGeady terrorising defences in a green shirt once again to celebrate as Ireland turned their attention to the much more taxing double-header against Russia and Slovakia next month.

Few who arrived to witness the first events at the newly-refurbished stadium expected anything other than and Irish victory, and a comfortable one at that with Andorra's largely part-time team ranked 201st in the world and without a win in 13 attempts.

For 44 of the opening 45 minutes, they were not disappointed as the Republic, for once cast in the role of favourite, took the game by the scruff of the neck.

True, they did not carve out dozens of clear-cut chances, but this is Giovanni Trapattoni's team, one based on defensive resilience and the ability to prevail in tight encounters through organisation, commitment and sheer bloody-mindedness.

They were ahead as early as the 14th minute when Kilbane timed his run to glance Liam Lawrence's near-post corner past keeper Josep Antoni Gomes and set the ball rolling.

Lawrence later chipped into the side-netting after embarrassing defender Marc Bernaus, Andorra's only full-time professional, but although McGeady toyed with full-back and by trade, estate agent, Jordi Escura, Andorra managed to keep their hosts at bay.

However, Ireland eventually extended their lead five minutes before the break, and did so in some style.

Lawrence caught midfielder Sergi Moreno, who had earlier almost left keeper Shay Given red-faced with a wickedly bouncing long-range effort, in possession and sensing an opportunity, Doyle arrived to add weight to the ambush.

When the ball finally emerged at the striker's feet, he set himself before smashing a rising left-foot shot beyond the diving Gomes and into the top corner.

The die looked to have been cast, but Andorra, who lost their opening game 2-0 to Russia on Friday evening, were not quite ready to throw in the towel, and when a 45th-minute clearance dropped to Martinez 20 yards out, he drilled a half-volley past the astonished Given to keep the game alive.

That would not have amused Trapattoni or his players as they sipped their half-time tea, and there was a renewed determination about them on their return.

Their response was swift and stylish as the third goal arrived with just nine minutes of the half gone.

McGeady headed in-field once again and with the help of Paul Green and Doyle worked his way into a position from which he could play Keane into the box.

Having fluffed his lines in Armenia on Friday evening, the Tottenham striker was not about to pass up another glorious opportunity and duly obliged with a deft finish to make the game safe.

It now seemed only a matter of by how many Ireland would win, and Keane was licking his lips when Doyle appeared to be hauled to the ground inside the box by defender Jose Fernando Silva 13 minutes later.

However, to the astonishment of both men, Cypriot referee Leontios Trattou waved their claims away.

But with the job done, the clock ran down with little prospect of a fightback from one side and no need for a cavalry charge from the other. 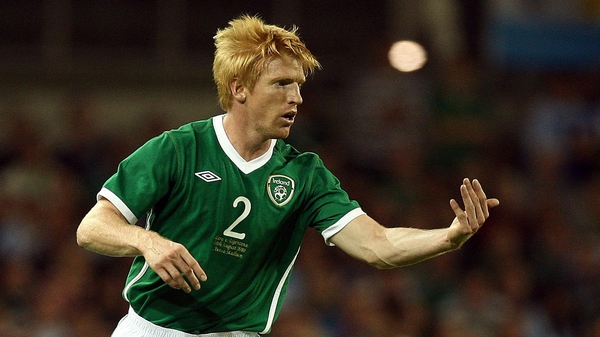 McShane taking nothing for granted