Republic of Ireland defender Paul McShane has warned the nation not to expect a landslide victory over Euro 2012 minnows Andorra tonight.

Ireland go into the game on the back of Friday night's trip to Armenia with three points banked from their opening Group B fixture and another three seemingly there for the taking.

However, no-one within the camp is taking anything for granted as Ireland attempt to win convincingly to placate the critics who have accused manager Giovanni Trapattoni of conservatism in his approach.

But McShane is adamant that the hosts must focus on simply getting the three points.

McShane said: ‘Convincingly as in what - six, seven? The three points are all that matters.

‘That's what matters. We don't want to get sucked into this, 'Let's win by six or seven'. Let's just get the three points on the board and see where it takes us.

‘We have got to be winning our home games, definitely, but let's not get sucked into the six or seven thing because these teams are tricky, as you have seen over the years.

‘Teams have come on on the international stage, so three points is the main thing.’

As so many of the comments made by Trapattoni's players in recent months, those words could have come straight from the 71-year-old Italian's own lips, and that is a measure of the extent to which the squad as a whole have bought into his philosophy.

However, the fact remains that under his tenure, Ireland have only once scored more than two goals in a single game, the 3-0 friendly win over Algeria in Dublin on 28 May this year.

The manager's justification is that during the same period, his side have lost only one competitive game, the 1-0 defeat by France at Croke Park in November's World Cup play-off, and McShane acknowledges that there has been significant development since Trapattoni took over the reins.

He said: ‘We have grown a resilience. There are some good, mentally strong characters in this squad and every game we go into now, we are looking to win or get a good result.

‘The confidence has grown and our mentality has grown, it has got stronger. We do seem hard to beat, and that's always a good thing to have as a team, to be hard to beat.

‘It has grown under the new manager.’

Greater tests than that likely to be posed by Andorra this evening lie ahead for Ireland, who entertain Russia next month before heading for Slovakia.

But while McShane accepts that the Russians are probably favourites to top the group, he insists the Republic must pay the same attention to all their rivals.

The Hull defender said: ‘They seem to be the highest seeded country there - but you can never rule out the other teams or be complacent against them, so every game, we have got to bring our 'A' game.

‘We have got to bring our best game to the table in every single game - you know if you don't, you could be found out, so we need to perform in every game.’ 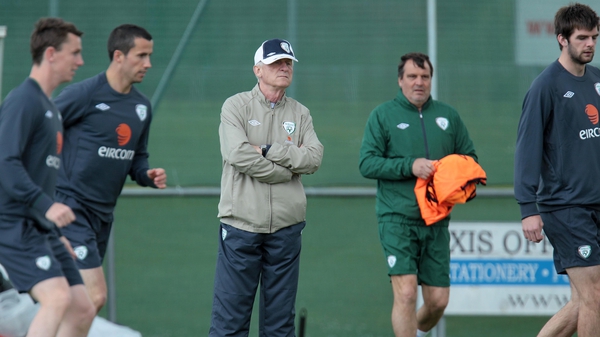 Trapattoni sticks with the same side