Diego Milito scored both goals as Inter Milan sealed a historic treble and ended a 45-year wait to be crowned kings of Europe after defeating Bayern Munich in the Champions League final in Madrid.

Milito struck in the 34th and 70th minutes as Inter became the first Italian team to win the treble of league, cup and European Cup in the same season, whilst ending German double-winners Bayern's hopes of doing likewise.

The victory was the third time Inter have won the trophy, following their successes in 1964 and 1965, and could also have marked a winning farewell for coach Jose Mourinho.

The Portuguese, who becomes only the third coach to win the European Cup with different clubs, has been the subject of intense speculation linking him with a summer move to Real Madrid.

Mourinho left Porto for Chelsea soon after leading them to the 2004 Champions League title.

For Bayern coach Louis Van Gaal, the defeat ended his chance to conquer Europe with two separate clubs having won the title with Ajax in 1995.

The match was billed as a clash of contrasting styles between the attacking philosophy of Van Gaal and the defensive proclivity of Mourinho, but there was little to separate the two sides early on.

The biggest threats came from two players who were returning to the Bernabeu having last summer been jettisoned by Real Madrid in the wake of the Spanish giants' €250million spending spree.

For Bayern, winger Arjen Robben was proving a persistent menace down the right, while for Inter, playmaker Wesley Sneijder was superb throughout.

And it was the Nerazzurri playmaker who came closest to breaking the stalemate during an evenly-fought opening 30 minutes.

The dead-ball specialist tried his luck from a free-kick 35 yards out, and Bayern goalkeeper Hans-Jorg Butt needed to dive to his left to parry the ball away after it had taken a slight deflection off his team-mate Hamit Altintop.

Sneijder, who was one of four former Madrid players in an Inter side without a single Italian, was involved in most of his side's attacks and it was no surprise to see him play a key role in the opening goal of the game.

Julio Cesar's long punt forward was headed down by Milito to Sneijder, who immediately set his team-mate through the heart of the Bayern defence.

The 30-year-old Argentinian powered into the area before leaving Butt with no chance to save with a rising shot.

Bayern, who were without suspended French star Franck Ribery, tried to respond quickly but, after long-range efforts from Altintop and Robben had failed to worry Julio Cesar, they almost found themselves trailing 2-0 just before the break.

Once again it was Milito and Sneijder involved, but with the roles reversed this time.

Milito picked out Sneijder running into the box and it needed a good block by Butt to keep out the former Ajax man's left-footed shot.

Bayern, who were out much quicker than Inter following half-time, had created little to test Julio Cesar in the first half but they almost fashioned an equaliser 25 seconds after the restart.

Ivica Olic's clever flick found Altintop in space and the Turkish international then fed the unmarked Thomas Muller on the edge of the Inter area, but the 20-year-old was denied by the feet of Julio Cesar.

Moments after that Inter launched a breakaway that almost resulted in a second goal, Goran Pandev's shot being superbly tipped over one-handed by Butt.

That was a thrilling start to the second period and Bayern were enjoying plenty of possession as they sought an equaliser.

However, the Inter defence, like it was in the semi-final second leg against last season's European champions Barcelona, was proving tough to break down.

Robben almost managed it with a curling 20-yard effort that brought a brilliant save out of Julio Cesar, while Muller saw a goal-bound effort blocked by the head of Esteban Cambiasso.

Bayern were dominating possession but they were hit with the ultimate sucker punch in the 70th minute as Inter broke away to double their lead.

Milito still had plenty of work to do when he picked up Samuel Eto'o's pass 35 yards out but he superbly turned Daniel van Buyten inside out before coolly finishing past Butt.

There was no way back for Bayern after that as Inter held on to end their long wait for European football's top trophy and perhaps give Mourinho a winning send-off. 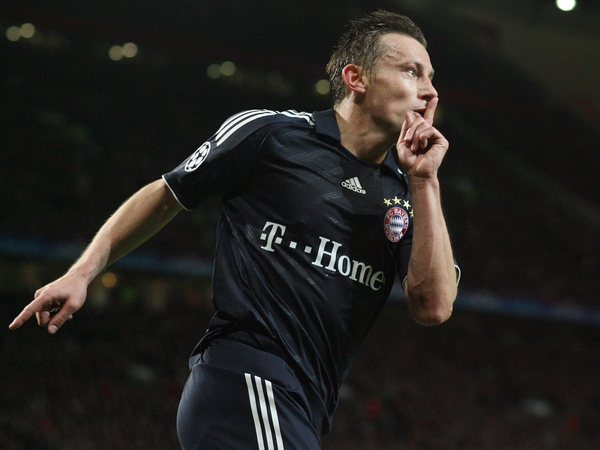