Olic had already ensured Bayern had one foot in the final with a 26th-minute strike when Lyon had captain Cris harshly dismissed on the hour mark.

The Croatia striker served the killer blow in the 67th minute and capped a great night for him and his team 10 minutes later when he headed home his seventh goal in nine Champions League appearances to seal Bayern's place in Europe's showpiece event at the Bernabeu.

With Bayern bringing a 1-0 first-leg lead to the Stade Gerland, Lyon knew they had to score twice to reach their first ever final.

However, they almost got off to the worst possible start when, with less than two minutes on the clock, Olic crossed in towards Thomas Muller who should have finished comfortably but the striker fired wide of the right upright with only the goalkeeper to beat.

Les Gones could have reignited the tie minutes later as a corner was headed on towards an unmarked Cris at the far post but the ball was just too high for him to get any direction on it.

And they were left with a mountain to climb shortly before the half-hour mark when Arjen Robben played in a lovely ball to Muller.

He was swiftly closed down by two Lyon defenders but managed to cut it back to Olic who spun and fired home.

The hosts should have swiftly levelled as Michel Bastos got on the end of Sidney Govou's cross but the Brazilian, who was completely unmarked, fired wide of the right post.

It was almost worse for Lyon moments later when Robben let fly from outside the area and the shot took a slight deflection before brushing past the right upright.

Bayern came out after the break determined to finish the job and they came close to doing so shortly after the restart as first Bastian Schweinsteiger drove in a 25-yard thunderbolt which flew just over before Lyon goalkeeper Hugo Lloris was called into action to prevent what seemed a certain second.

Muller played a ball across the outside of the area to Robben who took a couple of steps before letting fly but Lloris pulled off a good stop to deflect it out for a corner.

The Lyon goalkeeper, reportedly a target for the Bundesliga giants, almost went swiftly from hero to villain as, from the ensuing corner, Lloris was stranded in no-man's land as he took his eyes off the ball but fortunately so too did the Bayern attack and it floated harmlessly out of danger.

Lyon saw their final hopes slip away on the hour mark when Cris was booked for a challenge and was then shown a second yellow for ironically applauding the referee.

To add insult to injury replays showed that the Lyon captain's challenge was a fair one.

However, that seemed to spark Lyon into life and moments later they had their first shot on target when Bayern goalkeeper Jorg Butt, who had been largely a spectator until then, was called on to keep out a powerful Govou effort.

Yet it was during Lyon's best period that Bayern served the killer blow.

Hamit Altintop sent a brilliant ball through to Olic who beat the offside trap with a perfectly-timed run and slotted a diagonal shot into the bottom right corner.

Bayern should have extended their lead moments later but Lloris pulled off a fantastic stop to deny Robben before Jean Makoun's challenge stole the ball off Olic as he was about to let fly with his hat-trick in his sights.

Olic did score a third moments later, however, when he headed home Philip Lahm's cross from the centre of the area. 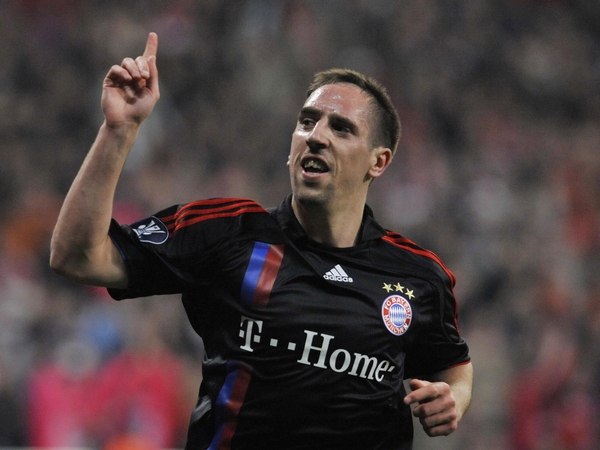