The 22-year-old Wolves striker came off the bench to level in injury-time as Ireland fought back to deny Serbia victory.

Trapattoni's side looked to be heading for defeat when substitute Marko Pantelic, who had only been on the pitch for five minutes, made the most of Paul McShane's error to fire past Dean Kiely 15 minutes from time.

But Keogh volleyed home from close-range in injury-time to send the home crowd into raptures on a big night for their Italian manager.

Across the city, another Boss was wowing an Irish crowd as Bruce Springsteen played to an adoring audience, perhaps a better bet than the Eurovision Song Contest going on at the same time in the Serbian capital Belgrade.

But at Croke Park, all eyes were on Trapattoni, who was greeted by rapturous applause as he made his way to the bench having swapped the tracksuit he has worn all week for a suit.

The Italian admitted yesterday that he was enjoying a honeymoon period after taking over at the helm on 1 May, but the reaction of fans who turned out in force to witness his first match suggested he has nothing to worry about just yet.

Ireland will head for Craven Cottage and a meeting with Colombia on Thursday night with much work to do before they launch their World Cup qualifying campaign in Georgia in September, but optimistic that there is more to come.

Ever since announcing his squad for last week's training camp in Portugal, Trapattoni had made a point of emphasising that he knew all about the ‘famous’ players who were excused the trip and was instead concentrating on some of its lesser-known members.

But it was two of the regulars who demonstrated that they are as keen to prove themselves to the new manager just as those with less established reputations.

Newcastle midfielder Damien Duff, one of the few senior men to travel to the Algarve, has endured a miserable two seasons in England, with injuries and a lack of form leading to speculation that his international days might be numbered.

However, having impressed with his industry and enthusiasm under the Iberian sun, he carried on in the same vein on a chilly night in Dublin to inject a little pace and invention into a tight opening 45 minutes.

Most of what was good came through Duff down the Ireland right, and it was he who created his side's best chance with 22 minutes gone when he tricked his way past impressive full-back Ivica Dragutinovic to send in a dangerous cross.

Central defender Rajkovic could only help the ball on to Keane at the far post, but by the time the Tottenham striker had guided his shot towards the bottom corner, Rajkovic had recovered to hack it off the line.

At the other end of the park, defender Richard Dunne was equally impressive despite only meeting up with his team-mates on Thursday evening.

He made a series of timely interventions as Serbia wide-men Stefan Babovic and Bosko Jankovic, prompted by playmaker Sasa Ilic, provided support for striker Danko Lazovic.

However, it was his 38th-minute error which handed the visitors their best chance of the half to allow Ilic to slip Babovic in, although he bundled his shot wide.

There were other positives for Trapattoni. Debutant Glenn Whelan looked at home in central midfield and keeper Dean Kiely, winning his first cap for five years, was a calming influence at the back but the Irish players left the pitch at the break knowing they were very much in a game.

Whelan excelled himself six minutes after the break when he broke up a potentially dangerous Serbia move on halfway by dispossessing Milan Smiljanic and set Duff away once again.

The winger forced Dragutinovic to concede another corner, but was then unable to pick out a green shirt from the set-piece as the red shirts once again massed to repel Ireland.

Keeper Vladimir Stojkovic was appealing in vain for a foul after he spilled Stephen Hunt's 56th-minute free-kick under pressure from Kevin Doyle, and he was grateful to see Dunne swing and miss at the loose ball with no whistle answering his pleas.

At the other end, Kiely was kept on his toes by Jankovic's sweetly-struck 72nd-minute shot from distance.

But he was beaten three minutes later when Pantelic made the most of McShane's poor positioning to run on to Dragutinovic's ball over the top and fire past the 37-year-old.

However, Keogh's late intervention provided a fitting conclusion to the game as sent the fans home with smiles on their faces. 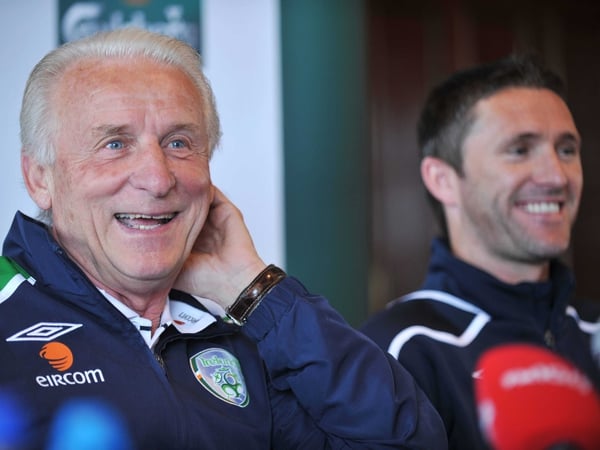