Celtic winger Aiden McGeady is convinced they can give Rangers a 'run for their money' in the title race after rediscovering their form at Fir Park.

McGeady believes the 4-1 win over Motherwell has revitalised their Clydesdale Bank Premier League push ahead of tomorrow's visit of Rangers.

And with each goal coming from a set-piece and strikers Scott McDonald and Jan Vennegoor of Hesselink both on target, McGeady feels they have given themselves a huge confidence boost.

Celtic have lost the last four Old Firm derbies without even scoring but McGeady is sure they can claw back a four-point gap.

McGeady, who last night picked up the Clydesdale Bank Premier League young player of the year award, said: 'Things haven't really been going our way recently but with the result on Sunday we can get back on track.

'It's a must-win game for us, the result at Ibrox a couple of weeks ago wasn't great for us, but with the result at Motherwell I think we can push on now.

'There is still a lot of football left to be played and I think we can definitely give Rangers a run for their money.

'We had such a good performance on such a bad pitch against Motherwell, who are a good team. It was a great result for us.

'I think before the game we would be saying to ourselves it was a tough task but that game could give us a big boost going into the game on Wednesday.

'On Sunday everyone showed more ambition to get on the end of crosses. We hadn't scored since Gretna, everyone was saying we were creating chances so the strikers take the main brunt of criticism.

'That isn't fair because I think everyone should be chipping in with goals but it was good for the strikers to get their first goals for a while.'

While McGeady was delighted with his young player of the year award, he is looking for more than an individual accolade from the season.

The 22-year-old said: 'Personal awards are great to look back on at the end of your career but you really want silverware.'

McGeady has scored seven SPL goals and created 15 more but that form has led to greater attention from opposition defences, and Motherwell played Brian McLean behind regular right-back Paul Quinn.

The Republic of Ireland international said: 'I was about to take a defender on and there are two players in front of me and they are both shouting "Show him down the line". It's quite disheartening being shown where to go.

'But I suppose it's a compliment if you are faced with two players every time you get the ball. I have said before it creates space for other players. It gets tougher when teams are doubling up on you and on Sunday I noticed it an awful lot.' 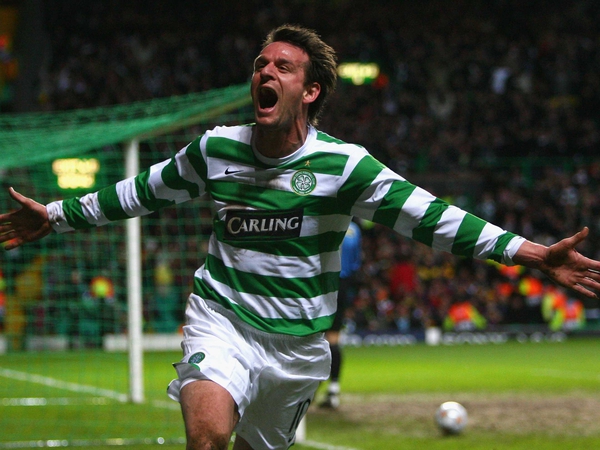