A Jan Vennegoor of Hesselink double in a 4-1 win over Motherwell at Fir Park breathed fresh life into Celtic's Clydesdale Bank Premier League title hopes ahead of the Old Firm clash on Wednesday.

Stephen McManus and Scott McDonald also notched for the visitors with Well's consolation strike coming when McManus helped a Ross McCormack shot into his own net.

Motherwell had won 1-0 at Parkhead last Saturday but there was no danger of a repeat.

The visitors looked determined to win straight from the first whistle and although they were pegged back in the first half after McManus had given them a 16th-minute lead, they ran out convincing winners in the end.

The victory closed the gap on SPL leaders Rangers to four points and although the Ibrox side have two games in hand, Gordon Strachan's side have the chance to put the pressure on with a win at Celtic Park in midweek.

The first chance of the game came in the ninth minute when Hoops midfielder Shunsuke Nakamura put McDonald in at the right-hand side of the Motherwell box.

The former Fir Park player cut inside Well defender Steven Hammell to set up a shooting opportunity from 14 yards out but sliced his shot wide of the far post.

The visitors looked more dangerous and in the 16th minute they took the lead through skipper McManus.

Celtic defender Gary Caldwell challenged Motherwell goalkeeper Graeme Smith for the ball after Nakamura had played in a free-kick, the ball spun high in the air and McManus climbed among a clutch of bodies to bundle it over the line from about a yard out.

Moments later, with the Fir Park defence missing, McDonald missed a sitter when he misdirected his header wide of the target from only six yards out.

But in the 23rd minute the home side levelled when McCormack broke on the counter-attack.

With the Celtic defence stretched, the former Rangers player played a one-two with Well midfielder Stephen Hughes, moved into the Hoops penalty area and beat Parkhead goalkeeper Artur Boruc with his angled shot and McManus could only help the ball into the net.

McCormack was booked for his over-exuberant celebrations but the game soon turned back in Celtic's favour.

In the 29th minute, Nakamura's cross was headed up in the air by Fir Park stopper Stephen Craigan and McDonald's volley from 12 yards took a deflection off Mark Reynolds to beat Smith at his near post.

Three minutes before the interval Celtic extended their lead with the minimum of fuss when Vennegoor of Hesselink bulleted Barry Robson's corner past Smith from eight yards out.

The points looked safe for Celtic as the interval whistle sounded and after the break it was Smith who was called into action almost immediately when he had to tip a powerful McDonald drive over the bar for a corner.

The home side defended the set-piece and raced up to the other end where McCormack sent a 25-yard volley inches past the post.

But Celtic were well on top and they stretched their lead further in the 56th minute when Vennegoor of Hesselink pounced on a loose ball 12 yards from goal and volleyed high into the net past Smith.

Motherwell looked a shadow of the side which had defended so resolutely at Celtic Park eight days previously as the visitors looked quicker, stronger and more determined in most areas.

Boruc was forced into a good save when Hughes ended a fine driving run by unleashing a shot from the edge of the box.

While there seemed no prospect of Celtic letting their three-goal cushion slip, Motherwell continued to search for a glimmer of hope but were denied again when McCormack's free-kick from 25 yards was comfortably gathered by Boruc.

The match petered out and it was Celtic who bounded off the pitch at the end knowing a win against Rangers at home on Wednesday could give them a championship lifeline. 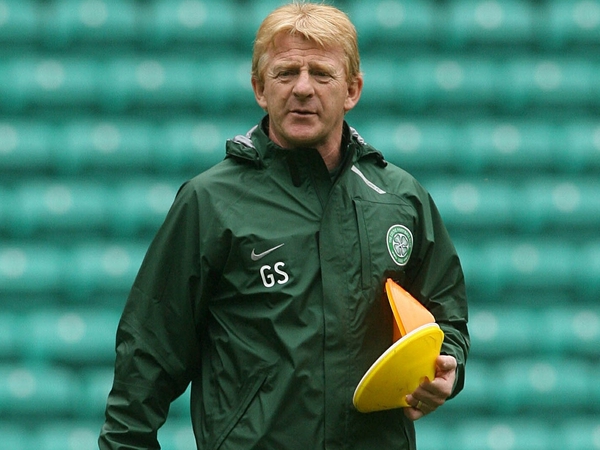