St Patrick's Athletic were elected to the League of Ireland for the 1951-52 season (which they won at the first attempt) following more than 20 years of success at Junior, Intermediate and Leinster Senior level, not to mention several decent runs in the FAI Cup as a non-league club.

The best of those came in 1948, when they made it as far as the semi-final, where they were hammered 8-2 by Shamrock Rovers. It wasn't a bad season for the Saints though, as they won the Leinster Senior League, Leinster Senior Cup and FAI Intermediate Cup.

That trophy came after a 3-1 win over Cobh Ramblers in the decider at Turner's Cross, Cork. Pat's had already beaten Cobh 4-1 in the first round of the Senior Cup en route to that semi-final demolition by Rovers.

Stars of the time for Pat's included 'Barreller' Cassidy and Jimmy 'Growler' Cummins (who won 17 medals in total for Pat's).

Pat's got revenge on Rovers the following year when they beat them 2-1 in a first round replay, after a 1-1 draw, but were beaten by Shelburne (1-0) in the second round.

Pat's made it to the semi-final again in 1951. Having beaten Shels and AOH, they drew 1-1 with Cork Athletic in the semi at Dalymount Park, only to lose the replay 4-2 at the Mardyke in Cork.

By now a League of Ireland member, Pat's finally won through to the final in 1954.

Having beaten the big Cork sides, Athletic and Evergreen, along the way, they met Drumcondra in the final at Dalymount.

It was to end in heartbreak though, as Pat's Dessie Byrne headed into his own net at the School End at Dalymount Park with just 11 minutes left to give Drums a 1-0 win.

Pat's finally got their hands on the cup in 1959. They met Waterford in the final at Dalymount with Jack Hunt (og) and Johnny McGeehan on the score sheet for Pat's in a 2-2 draw.

Three days later, Pat's beat the Blues 2-1 in the replay with McGeehan and Willie Peyton netting.

Pat's won their second cup in 1961 - no-one there that day would have thought that they would still be waiting for a third cup victory 45 years later.

In a tough run to the final, Pat's beat Cork Celtic (away), holders Shels and Cork Hibs (away) before overcoming Drumcondra 2-1 in the decider. Johnny White and Willie Peyton scored the goals.

Pat's' next appearance in the final was in 1967 against Shamrock Rovers, who were going for a fourth win in succession. This was the first FAI Cup final to be televised live by Radio Telefís Éireann, with Jimmy Magee providing commentary.

Rovers won 3-2 with Noel Dunne and Noel Bates scoring for Pat's. That great Rovers team went on to complete a historic six-in-a-row.

Pat's were next in the final in 1974, against Finn Harps, and again it was a historic occasion as it was the first final to be shown live in colour on RTÉ. Harps ran out 3-1 winners with Sean Byrne scoring for Pat's.

In 1980, Pat's  (unusually wearing green) had high hopes of beating Waterford United in the final but their dreams were dashed by a Brian Gardiner goal into the Tramway end at Dalymount which sent the cup down south.

Pat's' first Lansdowne Road decider came in 1996 when they drew 1-1 with Shelbourne, with Dave Campbell netting. He scored again in the replay at Dalymount but Shels won 2-1.

Pat's' most recent FAI Cup final appearance came in 2003 when they were beaten 2-0 by Longford Town.

Manager: John McDonnell
The Dubliner entered management after a glittering playing career that took in spells at St Pat's, Shamrock Rovers and Newry Town. The pinnacle came in 1996 when he captained St Pat's to the league title under Brian Kerr. He was player/ manager at Newry Town before taking over at Home Farm Fingal just as they changed their name to Dublin City. He left to become Pat Fenlon's assistant at Shelbourne before replacing Eamon Collins at Richmond Park in 2004.

One to watch: Trevor Molloy
Acknowledged as one of the top strikers in the league, Trevor Molloy is the focal point of most St Pat's attacks. He is also a dead-ball specialist, always demanding possession and is sure to be a key figure in Sunday's match. 29-year-old Molloy started off with Stella Maris before linking up with Shamrock Rovers aged 18. He then spent a short while with Athlone Town before Pat Dolan signed him for his first spell at St Pat's. He enjoyed great success with Pat's, winning two league titles, before departing for Bohs, where he was a double winner, followed by spells with Shels and Carlisle United. He then returned to Rovers and then joined Pat's for the start of the 2006 season. 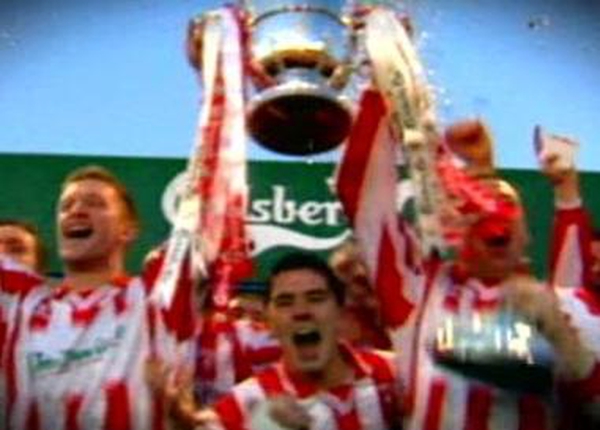