90 (+4): Duff wins a corner, which Cyprus clear with ease before the referee blows the final whistle.

90 mins (+2): Constandinou unleashes a fierce drive but Kenny gets his body behind it to prevent the striker completing his hat-trick.

89 mins: A last-gasp intervention from Finnan prevents Cyprus adding to the misery. The ball goes out for a corner, which comes to nothing. Ireland also win a corner but again a foul in the box leads to a free for Cyprus.

88 mins: Makridis has a great chance to make it six but his volley balloons over the bar.

85 mins: O'Brien wins a corner. An Irish player fouls in the box and the referee awards a free out.

84 mins: Cyprus are toying with the ten men of the Republic.

79 mins: Theodotou is booked for a foul on Duff.

77 mins: SENDING OFF. Richard Dunne sees yellow for the second time and is given his marching orders. A poor decision by the referee and a disappointing end to the game for the best Irish player on display.

74 mins: GOAL! Cyprus 5 Ireland 2. Paddy Kenny makes a fantastic save to deny Constandinou. However, Charalambidis follows up to slot home his second goal after coming on as a substitute. This is embarassing.

70 mins: Duff gets a good ball in but with no one attacking the front post it fails to threaten.

66 mins: A shot from Makridis forces Kenny to save and concede a corner. Nothing comes from the set-piece.

63 mins: Ireland's hopes of qualifying for Euro 2008 appear to be destroyed. After a heartening 1-0 defeat to Germany in Stuttgart, it looks like that result filled us with false hope.

60 mins: GOAL! Cyprus 4 Ireland 2. Charalambidis converts the easiest goal he is ever likely to score. The Irish defence is made to look thoroughly unprofessional.

56 mins: Aloneftis is the sixth Cyprus player to be booked. Stephen Ireland floats a free into the 'keeper's hands.

53 mins: Stephen Ireland shoots wide when Clinton Morrisson was free inside the box. The Cypriots are unhappy that play continued while one of their players was down inured. A skirmish ensues and leads to Okkas and Keane receiving a yellow card each.

49 mins: PENALTY. Andy O'Brien unneccesarily takes down a Cyprus player in the box. Richard Dunne had come across to block. The tackle is indicative of his performance tonight. He is also booked.

46 mins: A poor touch in the box by Okkas deprives him of a scoring opportunity.

45 mins: Cyprus make one change but Steve Staunton's assistant, Kevin MacDonald, has opted to keep faith in the starting XI.

HALF-TIME. Richard Dunne's header has restored parity for the Republic of Ireland but it was one of the few positives in the opening period. Steve Staunton is banned from talking to his players, but surely he must be thinking of replacing Andy O'Brien. The Portsmouth defender has had a dreadful first half and has been unable to get to grips with Constandinou. Duff is playing well on the wing and his crosses are causing problems for the Cypriot defence.

44 mins: Constandinou gets between Dunne and O'Brien. His fabulous shot is tipped on to the crossbar by Paddy Kenny. A fantastic save by the Sheffield United stopper.

44 mins: Constandinou gets in another header but it is from distance and is straight at Kenny.

42 mins: GOAL! Cyprus 2 Ireland 2. Richard Dunne gets on the end of a Duff corner. It was thundering header. How will Ireland cope without him on Wednesday?

41 mins: Lambrou's shot is blocked by Finnan and goes out for a corner. The set-piece comes to nothing when Okkas blasts high and wide. The problem was created by the Irish defence's inability to deal with crosses.

37 mins: Matsias is booked for a challenge on Keane. It would be no surprise if Cyprus were to finish without their full compliment of players.

35 mins: Another fine cross from Duff is almost connected with by Kilbane. Not for the first time, he claims his run was impeded.

35 mins: Constandinou becomes the third Cypriot player to be cautioned.

33 mins: Richard Dunne also gets his name taken for a reckless tackle. Frustration is starting to creep in. The Manchester City defender will miss Wednesday's game with the Czech Republic. It is going from bad to worse.

32 mins: Garpozis is booked for time-wasting on a throw.

28 mins: Duff, who is playing better than in recent games in a green shirt, wins a corner. The Newcastle United man takes it himself, but it is easily cleared at the near post.

25 mins: Constandinou rises above O'Brien again but his header drifts wide. It is a very open game but Ireland are looking decidedly uncertain in their play.

24 mins: Ireland have two great chances. Kilbane's effort is saved but in a subsequent chance Clinton Morrison has his goal-bound shot cleared just yards from the line.

23 mins: A concerted spell of Irish pressure ends with mcGeady crossing into the grateful arms of Morphis.

20 mins: A glorious cross from Duff is met by Keane at the back post but the Spurs striker sees his header shave the outside of the post. Unlucky.

18 mins A mix-up between Steve Finnan and Kenny almost leads to another goal for Cyprus. Richard Dunne has a go at Kenny afterwards. Ireland look extremely shaky at the back.

17 mins: A Damien Duff cross from a free-kick is easily gathered by the keeper.

14 mins: GOAL! Cyprus 2 Ireland 1. Left-back A Garpozis beats O'Brien and Kenny to a Lambrou cross to head the hosts in front.

13 mins: Okkas unleashes a decent left-footed shot from outside the box but Kenny gets across well to save.

10 mins: Robbie Keane sets McGeady free down the right hand side but the Celtic player's cross is too deep.

8 mins: GOAL! Cyprus 1 Ireland 1. A sloppy defensive header from Andy O'Brien falls kindly for Constandinou and this time he punishes the visitors.

7 mins: GOAL! Cyprus 0 Ireland 1. Stephen Ireland marks his first competitve outing for his country with a goal. A cross into the Cypriot box was touched back by Aiden McGeady and the Manchester City player finished with a sweet strike.

4 mins: Constandinou gets through clean on goal but Irish golkeeper Kenny spreads himself well and the striker's shot rolls harmlessly past the right post. A huge let off for Ireland.

3 mins: The surface of the pitch is atrocious.

0 mins: Damien Duff wins an early corner for Ireland. Kevin Kilbane claims he was pushed as he raced in at the back post. The referee waves away his protests. The replay shows contact was minimal. 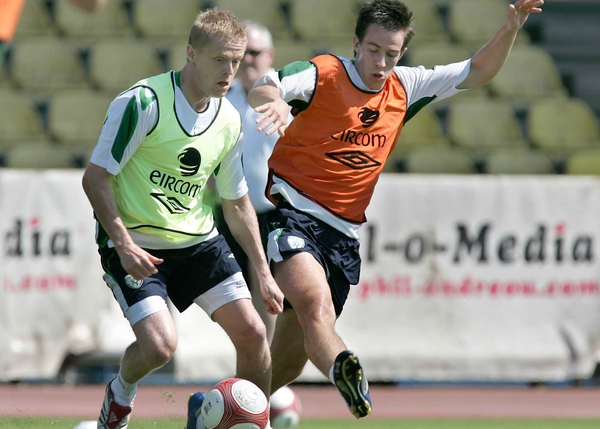