Despite topping Group A to qualify for the last 16, Luiz Felipe Scolari's men stuttered to a somewhat fortuitous win against Croatia before being held to a goalless draw against a well-drilled Mexico side and, in Chile, La Selecao should face their toughest opponent yet.

Chile's soft core
When Fernandinho and Oscar combined for Brazil's fourth against Cameroon during the group stages this brought to the fore one of the strengths shown by Scolari's side on the way to the finals.

Creating and scoring goals from central areas was a particularly well-used tactic by Brazil, with 65 per cent of all strikes coming from this area, a stat which puts them in the top 20 per cent of teams appearing at the finals.

Taking into account Chile's apparently soft centre - they conceded 64 per cent of all qualifying goals from here - this game could be won and lost through the middle.

Shot-shy Chile to be outgunned
Only four teams have had more average shots per match at the finals than Brazil, who have managed an impressive 15.3 efforts at goal.

Despite winning two of their group games, Chile have allowed more shots on their own goal than they have attempted at the other end, managing a meagre average of just over seven shots per game - only Iran have been less effective at testing their opposition goalkeeper.

It certainly seems Barcelona-bound Claudio Bravo will be the busier of the two custodians on Saturday.

Wily Brazilian defence is a tough nut to crack
No team at the finals has made more interceptions in their own defensive third than Brazil.

La Selecao have stolen possession from 61 per cent of passes made by their opponents in this area - Chile's expected attacking trio of Eduardo Vargas, Alexis Sanchez and Felipe Gutierrez will need to improve on a largely disappointing performance against the Dutch last time out if they are to have an impact in Belo Horizonte.

At the other end statistics suggest that Brazil's defence might have it a little easier - no other team has intercepted a smaller share of passes made into the final third than Chile (22 per cent).

Summary
With no room left for error now, Brazil will need to be at their very best to see off a hard-working Chile side who have already shown their capabilities on the biggest stage with a 2-0 win against Spain.

Having drawn just once and lost nine of the last 10 clashes between these two sides, Chile will be hoping for a reverse in their fortunes which would see La Roja progress to the quarter-finals against the odds for the first time ever outside of their own country.

Jorge Sampaoli's side's main concern will be handling the in-form Neymar who dazzled against Cameroon in Brazil's final group game and will be looking to add to his current tally of four tournament goals. 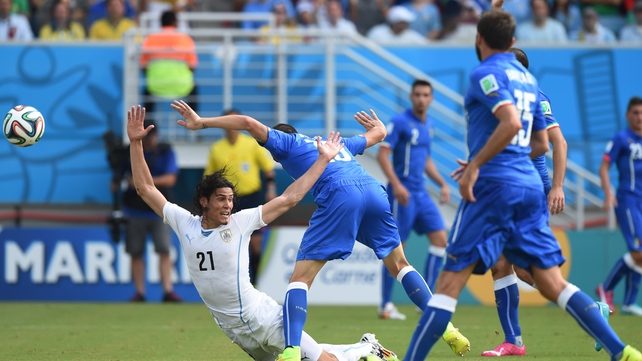 Saturday evening's second all-South American Round of 16 clash between Colombia and Uruguay has been rather overshadowed by one high-profile absentee.

Colombia head into this match as significant favourites following Luis Suarez's lengthy ban for biting Italy's Giorgio Chiellini, which put Uruguay's star man on a plane home rather than preparing to face the Colombians.

Suarez certainly had previous against Los Cafeteros having scored all four goals in an emphatic 4-0 win in November 2011 and his ban means the pressure will increase on Edinson Cavani (above) to step up to the plate against a Colombia side who have thrived during the last two-and-a-half weeks.

But it certainly will not be easy. Uruguay have won six of the last eight meetings and took the bragging rights in their only previous World Cup meeting back in 1962.

A repeat of that 2-1 victory would have Uruguay dreaming of repeating 1950's memorable World Cup triumph, even without their controversial frontman.

A battle of who can pass less?
Despite only dropping three points between them during the tournament so far, these are two teams who do not indulge in tiki-taka.

Jose Pekerman's side saw off Greece, Ivory Coast and Japan, scoring nine goals in the process, despite completing fewer passes then all three while eliminated duo Italy and England, who made over 160 passes more, both out-passed the Uruguayans during the group stages.

Only four teams in Brazil have completed fewer passes than Uruguay's average of 247 per match, and Colombia's tally is just one more.

So we could well see a repeat of Holland v Chile where both sides were readjusting to having the ball for long spells rather than soaking up pressure and hitting teams on the break as they had done so well previously.

Suarez may not be the only late exit
While their last nine encounters have seen goals rain in at an average of 3.6 per game, the real drama in this tie looks certain to arrive in the second half, especially the final 15 minutes.

And we could have to wait even longer for the goals to flow freely. James Rodriguez's clipped finish to put the gloss on Colombia's 4-1 win over Japan was their ninth goal of the group stage, six of which have arrived in the 70th minute or beyond.

And when Diego Godin's 81st-minute header saw off Italy it meant half of Uruguay's goals have been scored during the same time frame.

Uruguay will have to be alert in the central areas
Colombia, with their 4-2-2-2 system, often launch attacks through the middle and have scored over two thirds of their goals from central positions on the road to Brazil.

They have continued that trend in the last two weeks with five of their nine goals arriving that way.

Those highlight reels will not make pleasant viewing for Oscar Tabarez, whose Uruguay side conceded 64 per cent of their goals during qualification from central areas.

Summary
With Uruguay having grabbed two late winners already and Colombia having netted nine of their last 11 World Cup goals in the second half this could well be a South American classic that takes a while to catch alight.