Luiz Felipe Scolari is "100% convinced" he will be the first man to guide Brazil to World Cup glory on home turf.

The well-travelled coach, known as 'Big Phil' to English fans, is back in the job which made him famous and promising the Selecao will be crowned world champions for the sixth time on July 13.

No one really expected Scolari to succeed at the 2002 finals in Japan and South Korea.

Brazil had been under-par during qualification and needed a final-round victory over Venezuela to reach the Far East, where Scolari had briefly managed Jubilo Iwata before returning to South America.

The preparations for that World Cup campaign were shrouded in mystery under a man who refused to pick superstar striker Romario and who regularly drip-fed misinformation about his personnel choices.

Scolari's name was now inscribed alongside those of Vicente Feola, Aymore Moreira, Mario Zagallo and Carlos Alberto Parreira but August brought his resignation and a new adventure in Europe.

Mixed experiences with Portugal, Chelsea and Bunyodkor of Uzbekistan preceded a return home to Palmeiras, where Scolari bided his time while Mano Menezes struggled in the Brazil hot-seat.

Come November 2012, Scolari had replaced Menezes to come full circle - and this time things would be a little different.

There were no smoke and mirrors as Brazil set out to defend the Confederations Cup, a mission they completed in some style by dispatching world champions Spain 3-0 in the Maracana final.

The Selecao were back on top and, when Scolari sat down to face reporters following a 5-0 demolition of Honduras last November, he asserted his belief that Brazil would soon rule the world once again.

"There is no pressure on Brazil," he said. "Brazil are not under pressure to be the world champions. Brazil will be the champions.

"I wouldn't have accepted the Brazil job if I didn't think we could win the World Cup. I wouldn't be leading the team I'd be sitting at home.

"I took this job because I'm 100 per cent convinced that I will win the World Cup with Brazil."

If Scolari is to deliver on his ambitious promise - a pledge an expectant nation is treating with the utmost solemnity - then he must do so with a noticeably younger team than the one which triumphed in Japan.

At 34 goalkeeper Julio Cesar is the oldest member of squad that includes 22-year-old forwards Oscar and Neymar and 21-year-old winger Bernard.

Scolari has already hinted his master plan involves combining the talents of his youngsters with the wiliness of old heads Fred, Maicon and Dani Alves, but inexperience remains a concern for fans.

He has, however, moved to assuage those fears.

"This team is much younger and lacks the experience of the 2002 squad," he said. "But this group has a different dynamic and it's the type of dynamic required in football today."

Scolari has already done enough to secure a place in Brazilian folklore but, if he fails to keep his bold promise this summer, he is unlikely to get a third shot at winning the greatest prize in world football. 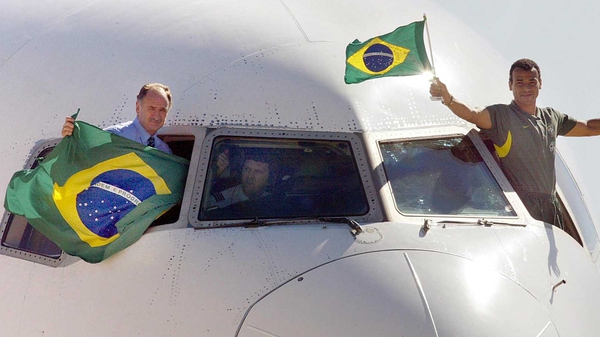