Germany keeper Manuel Neuer and captain Philipp Lahm kicked off their belated World Cup preparations on Thursday with light training after missing the start of the camp through injury.

Neuer did not do any goalkeeping training and only some light running as he races to recover from a shoulder injury in time for the tournament’s 12 June start.

There was more good news for coach Joachim Loew at their northern Italian training camp with Lahm training in part with the team for the first time since he sustained a foot injury in the German Cup final two weeks ago.

"At the moment they cannot be fully fit with us, but it looks good for both of them," defender Jerome Boateng told reporters. "For Manuel it may take a bit longer, but it will all work out."

Neuer has been the undisputed number one goalkeeper for four years, but there have been concerns in recent days about whether he will be fully fit for Germany's first match on 16 June against Portugal.

Team officials said midfielder Bastian Schweinsteiger, also recently back from injury, upped the tempo during training as well and looks on track to be fully fit for the start of the tournament.

Injured left back Marcel Schmelzer was the only absentee.

Germany, drawn in Group G along with Ghana, the United States and Portugal, have had to deal with a string of injuries to key players in recent weeks as they look to Brazil, where they hope to end an 18-year wait for an international title. 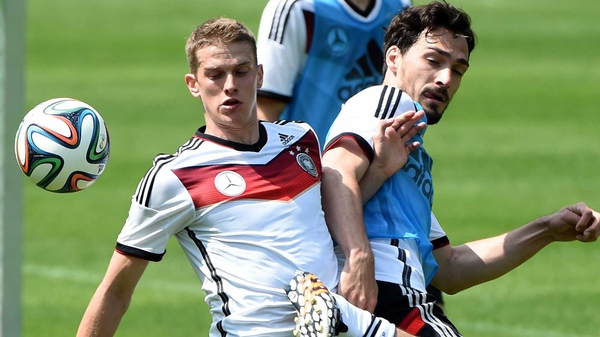