World number one Mark Selby repelled the brave challenge of qualifier Sam Baird to book his place in the quarter-finals of the World Snooker Championships in Sheffield.

Selby was pushed to the limit by the world number 59, who won four consecutive frames to claw his way back to level before the favourite finally prevailed 13-11 in a late-night thriller.

Selby had looked on course to coast into the last eight when consecutive breaks of 134 and 84 helped him ease into an 11-7 advantage at the start of their evening session.

But on only his second visit to the Crucible, Baird showed no signs of flagging and instead began to threaten to pull off what would have ranked as one of Crucible's biggest upsets.

Selby said: "I never take anything for granted and I seem to make every match hard work for myself. In patches I felt okay, and in other parts of the game I was very poor.

"At 11-7 I thought I'd done enough to almost get over the line but then my focus went all over the place. (But) I'm still in the tournament and I've got a chance to improve."

Selby will next face either Mark Allen or Kyren Wilson in the quarter-finals and he admitted: "No disrespect to Sam, but I've got to play a lot better than that."

In the other match in the evening session, former champion John Higgins built a 5-3 overnight advantage over Ricky Walden, rounding off a productive session with a break of 107.

O'Sullivan scored two centuries to Hawkins' one, but the underdog came on strong and will fancy his chances of maintaining his advantage when their meeting resumes on Sunday.

Elsewhere World Snooker confirmed it will bring forward a scheduled replacement of cloth and cushions at the Crucible following complaints by players.

?? McManus, Williams and Selby all through to the quarter finals - see scores after S3! #ilovesnooker @Betfred pic.twitter.com/qnI5L5Xjex

Ali Carter criticised what he called the worst conditions of his career after letting slip a 9-7 overnight lead to lose his second round match 13-11 to Alan McManus in the morning session.

Carter, a two-time Crucible runner-up, said: "The conditions were absolutely horrific - there were kicks every other shot and big bounces.

"I don't think I've played on a table that bad in my career. It's the same for both players but it's how it affects you mentally."

The 36-year-old lost the first four frames of the morning session to hand the initiative to McManus, who duly booked his last eight place for the second time in three years at the age of 45.

McManus said: "I could sense (Carter's frustration) and I could understand why, with the conditions being quite trying out there on our table.

"It can spoil your game totally so I thought, 'Right, just tough it out here - I'm going to get some dodgy bounces but try to get some chances and keep the white from not using too many cushions' - that's kind of crazy but I was thinking that."

The conditions - which appear to be specific to table one - were also criticised by former winner Mark Williams after he booked his place in the last eight with a 13-8 win over Michael Holt.

Williams had taken matters into his own hands in the opening session on Friday when he risked censure by wiping down the cushions, and he picked his words carefully.

After booking his place in the last eight for the first time in five years, Williams said: "I think I know what the problem is but I can't say it up here because I'll get fined.

"The bounces we've had for so long now are so frustrating because they've got the solution in the office right now - it's only a tiny thing they've got to do and it will get rid of bounces instantly, but they just won't use it." 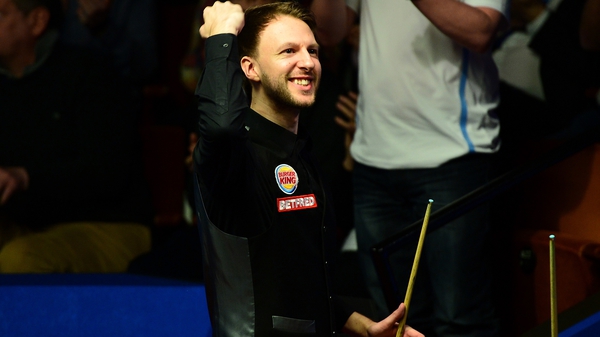 Judd Trump battles back to edge out Liang Wenbo