Judd Trump produced a great escape to keep alive his hopes of a first Betfred World Championship title with a 10-8 win over Liang Wenbo iat the Crucible Theatre.

At the tournament he regards as being "10 times bigger" than any other, Trump was in deep first-round trouble when he dropped the opening frame of the day to slide 7-3 behind against Wenbo.

The 26-year-old had been off his game on Wednesday and it called for a champion's response to clamber out of danger.

Trump, who reached the 2011 Crucible final and was a semi-finalist last year, was up to the challenge and took seven of the next eight frames to claim victory.

Trump admitted it was going against him at 7-3, but he was heartened by edging the next frame, and said on BBC Two: "Then I got some momentum and played some really good stuff.

"I took the balls really well, felt very confident, very relaxed under pressure. It seemed like when I had my back against the wall that's when I thrived.

"I took a bit of heart from when I was losing big to Shaun Murphy a few years ago and came back to win that.
"I'm so pleased to get through. I can't wait for the next game now."

When he trailed 7-6 at the mid-session interval, Trump was working his way back into the match and tournament, but still tweeted from his dressing room: "Drinks on me later if I get out of jail here."

Trump lost 6-4 to Liang, a fellow left-hander, at the UK Championship in December, tumbling out of the tournament after squandering a 4-1 lead, and called the loss "embarrassing."

This would have been a chastening defeat too. In four previous visits to the World Championship, Liang had lost three times in the first round, with the exception coming on his debut eight years ago when he made an eye-catching run to the quarter-finals.

Liang had an 8-3 lead in his sights when he took on a tricky blind double on the green in the next frame. He missed it and that proved a turning point.

It was not vintage Trump that saw him claw back to 7-5, but a sparkling 106 followed.

A nine-minute delay in the 14th frame interrupted the flow of the match as 26-year-old German referee Marcel Eckardt took his time over replacing the scattered balls after Trump fouled. "It does look a bit farcical at times," said BBC pundit and seven-time world champion Stephen Hendry.

Trump made light of the situation to level the match, added 69 in the next frame to go ahead, and despite Liang drawing level at 8-8 it was the Bristol-born cueman who marched through, punching the air in relief at the end.

On the other table, Hong Kong's Marco Fu edged 5-3 ahead of Scotland's Anthony McGill as they began their best-of-25-frame second-round match.

Kyren Wilson held his nerve to edge out Joe Perry 10-9 and book a second-round clash with Mark Allen.

Wilson botched the chance to seal victory in the penultimate frame, Perry swooping in to take the tie into a decider in Thursday's evening session.

Just when Perry thought he could take advantage of Wilson's wobble however, the 24-year-old rallied to steal the decider and reach his first second-round clash.

Ali Carter held a 5-3 lead over Alan McManus at the end of the first session. 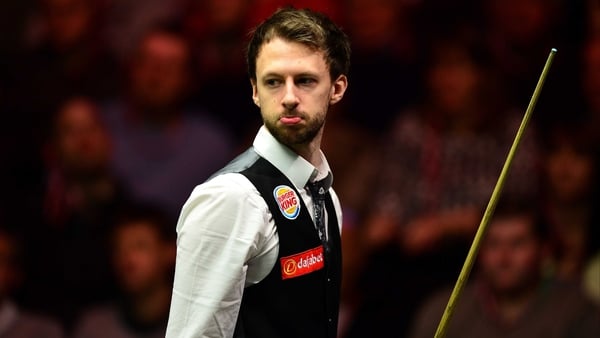 Judd Trump has 'no more excuses' for first world title