Judd Trump says he has "no excuses" left as he steps out in a quest to win a first Betfred World Championship title.

The 26-year-old went close to landing the silverware five years ago, when as a qualifier he produced a stunning run that was only ended with defeat to John Higgins in a classic Crucible final.

Last year the swashbuckling Bristolian was beaten by eventual champion Stuart Bingham in the semi-finals, an upset that was followed by Trump's conqueror carrying off the title.

"It's the last thing I need to top off what I wanted to do when I was a kid. I feel I've achieved everything else"

Trump was warned on Friday by Ronnie O'Sullivan that he needs to get a first world title under his belt before turning 30, or the challenge will become far more difficult.

And Trump, as the tournament begins in Sheffield on Saturday, is certain he is playing well enough to achieve his life's ambition over the next 17 days.

"There's no reason anymore why I shouldn't be winning here. I'm not too young, it's not come too early now, so there's no more excuses. I've had my five or 10 years of growing up.

"Ronnie won it (for the first time) when he was 25, which is quite old for someone that good, so if I win it this year or next year I'm still not far behind him and he's the greatest player ever."

The #330,000 top prize would be a welcome bonus, but Trump, who won the China Open earlier this month, does not need the money at this stage of his life.

Joining the ranks of the world champions whose portraits line the walls of the South Yorkshire theatre is his motivation.

"In my eyes it's 10 times bigger than the other tournaments," Trump said.

"It's the last thing I need to top off what I wanted to do when I was a kid. I feel I've achieved everything else.

"To win it this year would be extra special."

Asked if Trump has what it takes, O'Sullivan said: "Absolutely. He's 26 and he's at the prime age now to push on.

"If he's going to make it happen he's got to make it happen in the next two or three years, because once you go into your thirties and you haven't won the world title, and then there's a new batch of young players coming through from China, from here, there and everywhere, you can start to think that 'maybe I might not' - and the pressure gets more and more."

Saturday morning was set to see Bingham tackle Ali Carter in the first match of his defence, with Marco Fu facing 2002 world champion Peter Ebdon on the other side of the curtain.

Both matches were due to conclude in the evening, a change for the tournament where in recent years only the defending champion has completed his opening match on day one.

Trump starts on Wednesday when he faces Liang Wenbo, the Chinese player who surprisingly beat him at the UK Championship in December.

O'Sullivan faces Tamworth's David Gilbert in a first-round match that will span Sunday and Monday. 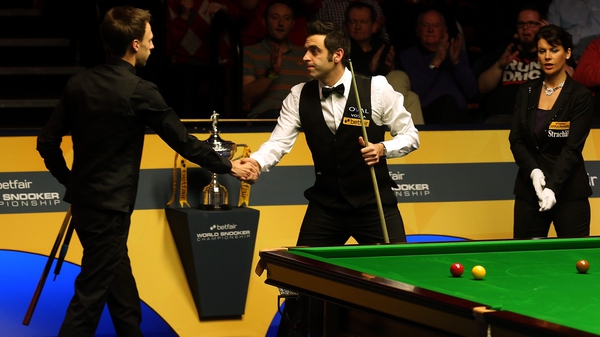