Snooker chief Barry Hearn has warned players they risk losing their "get out of jail card" next season in the wake of Ronnie O'Sullivan avoiding a fine for ducking mandatory media interviews.

Veteran promoter Hearn described O'Sullivan's failure to speak to reporters and television following his first-round victory at the Betfred World Championship as a "Ronnie moment".

The five-time world champion escaped with a slap on the wrist after the media blackout that followed his 10-7 victory over David Gilbert at the Crucible. As well as refusing to attend a press conference, O'Sullivan declined to talk to tournament broadcasters the BBC.

World Snooker, of which Hearn is chairman, announced O'Sullivan was issued with a warning as it was a first offence of the season, with fines to follow for any further breaches of discipline.

O'Sullivan courted controversy earlier this year after he snubbed the chance of a maximum break in a row over prize money at the Welsh Open, but that was not considered a breach of any rules.

"Ronnie had a Ronnie moment," said Hearn, who revealed he sent a text to the 40-year-old. Later, speaking on BBC2, Hearn added: "He has been treated the same as any other player. He signs a players' contract and the first breach of that is a warning.

"Disappointingly I think quite a few players this year have used that 'get out of jail card' for the wrong reasons and, as such, probably I would think they will now lose their warning because it has been abused.

"That is an issue for the board of World Snooker and we will look at that."

"I think quite a few players this year have used that 'get out of jail card' for the wrong reasons."

O'Sullivan's behaviour inevitably raises questions over the title favourite's state of mind as he begins preparations for a second-round match against either Barry Hawkins or Zhang Anda, which will begin on Saturday.

However O'Sullivan causing controversy in Sheffield is nothing new. Last year he began his campaign in ill-fitting new shoes and had to borrow a pair from tournament director Mike Ganley mid-match, after briefly playing in his socks.

He was warned for making a rude gesture during his second-round match against Matthew Stevens, and was later embroiled in a chalk controversy when he placed the small cube on the table during his quarter-final defeat to eventual champion Stuart Bingham.

Meanwhile, Hearn also announced that the Masters will be re-branded as The Paul Hunter trophy. Hunter, a three-time Masters champion, died in 2006 five days before his 28th birthday after losing his battle with cancer.

Hearn said: "This year we acknowledge and remember 10 years since the passing of Paul Hunter, a sad loss for the game, a talent that was mercurial.

"When people talk about 'where are the personalities?', Paul Hunter was there in spades.

"It is something that perhaps could be argued that we should have done before, but from this January, the Masters trophy in perpetuity will be renamed the Paul Hunter Trophy in memory of Paul, and I think snooker fans around the world will appreciate that gesture to a great, great player." 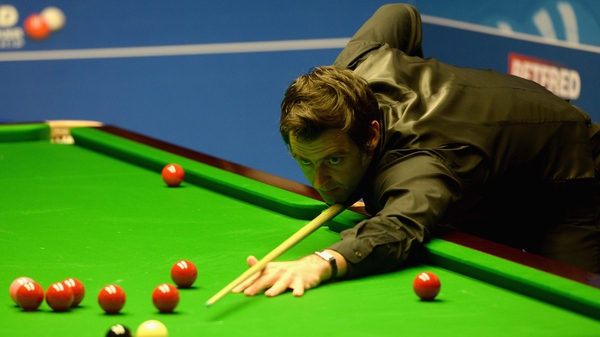