Ronnie O'Sullivan completed a tremendous clearance to beat Mark Selby and book his spot in the semi-finals of the Masters at Alexandra Palace, London.

O'Sullivan is back on the big stage after eight months away and battled to a 6-5 victory over Mark Williams in round one.

The five-time world champion was still not happy with his form following his 6-3 win against Selby, but those watching were certainly impressed.

O'Sullivan was never behind at Alexandra Palace, winning the opening frame with a 63 break before Selby pulled level.

Both men knew the seventh frame was crucial and made mistakes as a result, but it was O'Sullivan that crossed the finish line.

Selby mounted a fightback by winning the eighth frame and looked poised to make it 5-4 when he compiled a break of 70.

But O'Sullivan cleared the table with a 73 and will play either old rival John Higgins or world champion Stuart Bingham in the last four.

Reflecting on his clearance, O'Sullivan told BBC2: "It was a good first red. Under pressure it was good but I was never going to refuse a shot.

"I don't feel great but I'm trying to kid myself that I'm confident. You're not going to win this tournament by playing negative, playing bad. I need to try to find something."

O'Sullivan famously called Selby 'The Torturer' in his autobiography as a reference to the Leicester man's speed of play.

But O'Sullivan praised his opponent after Thursday's match and admitted he had misjudged Selby.

Quoted on worldsnooker.com, O'Sullivan said: "Mark is the only player who can win tournaments when he's not at his best because tactically he is unbelievable and he's the hardest match player on the circuit.

"I watched all of his matches during the UK Championship and I realised how difficult he is to play for every opponent - he's like granite. I realised he doesn't only play like that against me.

"I admire his tenacity and his will to win, I've got massive respect for him. We've had a bit of grudge and needle over the years and I have probably taken it personally, but not any more because I know he's a great player."

Barry Hawkins is also through to the last four after a 6-2 victory over Mark Allen.

Allen, who knocked out defending champion Shaun Murphy in round one, began brilliantly with a century in the opening frame.

But Hawkins took control with a run of four frames in a row and from then on a match against either Judd Trump or Neil Robertson was never in doubt.

This week has been a real breakthrough for the 36-year-old, who had never previously won a match at the Masters. 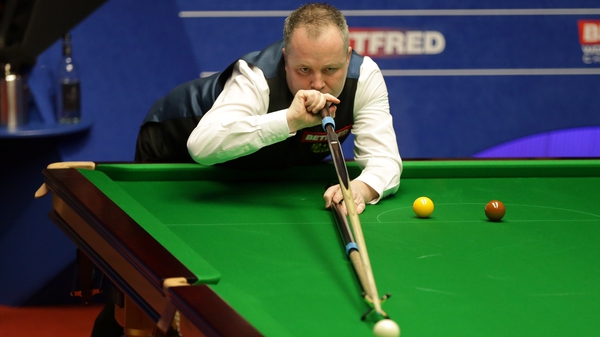 John Higgins through to last eight at Masters