Shaun Murphy moved to the brink of a third Betfred World Championship final but must return to complete the job against Barry Hawkins on Saturday.

The 2005 title winner and 2009 runner-up will resume in the afternoon with a 16-8 lead, with Hawkins spared the indignity of losing their semi-final contest with a session to spare after taking the last frame of the night.

Murphy began the evening leading 13-3, having made breaks of 73, 105, 79, 72, 121 and 54 in a spectacular morning performance, and needed just to share the spoils from their eight-frame session to finish off the Kent cueman.

But when Hawkins made 76 to extend the best-of-33 match to a third day, he wore a broad smile across his face and waved to the crowd.

His fate is all but sealed, and Hawkins knew it. Breaks of 103, 57, 104, 73 and his closing run made it a night where Hawkins at least secured respectability, swiftly eliminating the threat of a 17-3 defeat, which would have been the heaviest semi-final loss in tournament history.

Stephen Hendry took a 17-4 pasting at the hands of Ronnie O'Sullivan at this stage 11 years ago.

It was an entirely different story in the other semi-final, where Stuart Bingham was tearing up the script as he stayed on course to topple crowd favourite Judd Trump.

If the talk off the table in Sheffield was of a 'dream ticket' final between master potter Trump and in-form Murphy, first-time Crucible semi-finalist Bingham was working determinedly in the arena to give himself every chance of defying pre-match expectations.

He went from 5-3 ahead overnight to 9-7 in front of a misfiring Trump, and stood every chance of following up his quarter-final victory over Ronnie O'Sullivan with a second huge scalp.

Bristolian Trump has been widely backed to land his first world title this year, with seven-time champion Hendry among those who have forecast that breakthrough for the 2011 runner-up.

But he had been feverish after his previous win over Ding Junhui, going straight back to bed after wrapping up a 13-4 success.

Still Trump liked his chances, saying: "Every player fancies themselves and everyone has got the self-belief that if they have that chance they'd probably take it, but I just need to keep doing what I'm doing, focus on my game and if I can keep playing like that I'll be more than happy."

He would not be happy with his afternoon display though, with the consolation being that Bingham did not take advantage by extending his two-frame lead.

There was a dash of Trump magic in the second frame of the session as he peppered a break of 113 with exhibition shots. That can hint at Trump being in the mood, but he was otherwise curiously flat.

He at least finished on a high, with a break of 64, capped by a showy sinking of the brown, making the gap just two frames overnight. Morning and evening sessions on Saturday will settle the contest.

There will be ample time for 25-year-old Trump to turn the match around, should he pick up form. For 38-year-old Basildon man Bingham, who had breaks of 52, 67, 54 and 85 in staying ahead, there will be the new pressure of a World Championship final appearing on the horizon. 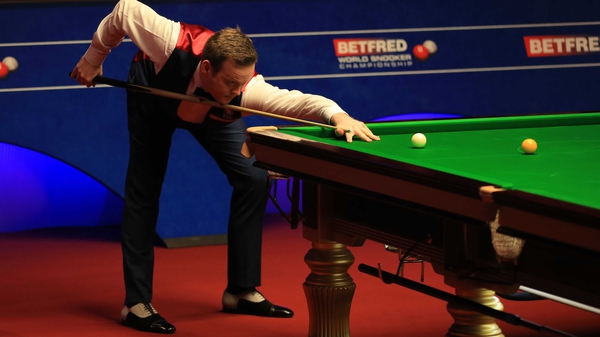