Stuart Bingham will face Mark Allen in the final of the Shanghai Masters following a 6-4 win over world number three and home favourite Ding Junhui.

Bingham, whose only other ranking title came at the Australian Goldfields Open in 2011, will face Northern Irishman Allen who was 5-2 down in their best-of-11-frame contest but powered back to 5-5, with the highlight coming in the ninth when Allen put together a 115 break.

In the deciding frame Selby took a 63-0 lead but the world champion ran out of position on the next red and had to play safe, with 75 points left on the table.

Allen, who edged past Michael White 5-4 in the last eight, could not clear in one visit when a chance came along but he put together a break of 40 to move back into contention.

Selby had another chance to complete victory but missed the pink after potting the final red, and left Allen in to clear up, which he did.
Allen was delighted with his fightback, especially against Selby, who has put together a few of his own in the past.

"It's good to get one over on Selby as he does it to so many players," Allen told World Snooker's website.

"I started poorly so I had to dig deep and I played much better after the interval. In the last frame he looked as if he was going to close out the match in one visit so I'm very happy to pinch it on the last black.

"The last four frames was the best I've played so far in this tournament, but I can play better and hopefully I'll do that tomorrow. If I play Ding it will be a great atmosphere. In a big final you want it noisy."

Selby was disappointed he could not seal the win after taking such a commanding lead.

"Mark didn't let his head go down at 5-2 and played some good snooker. I had two good chances in the last frame," he said.

"Up to 4-1 I played as well as I have done this week. I felt as if I was in control, but then missed chances and Mark capitalised.

"He showed great character and I wish him the best in the final. One ball can turn the match around. I've done that to opponents before so I know how it feels."

Over the moon to get through today. Wasn't at my best in the early stages but dug deep and found a bit of form. Never easy against selby 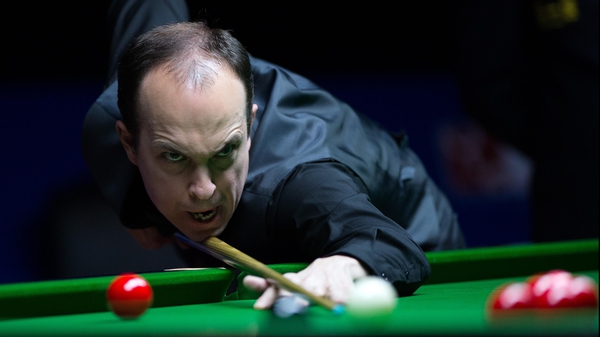 Mark Allen marches on in Shanghai but Fergal O'Brien bows out