Mark Selby eased into the semi-finals of the Shanghai Masters with a 5-0 defeat of Fergal O'Brien.

The 'Jester from Leicester', ranked number one in the sport's money list, started and finished with a flourish.

Selby won the first frame with a break of 75 and wrapped up with a 76, although there was little to separate the two in the middle three frames.

He will play Northern Ireland's Mark Allen for a place in the final after Allen held his nerve to edge Michael White 5-4.

Breaks of 83, 55 and 74 helped Allen take control and he moved to within a frame of victory by edging a tight fifth frame.

However, the 28-year-old from Antrim failed to score a point as Welshman White stormed back with breaks of 85, 83 and 76 - only for Allen to seal victory by edging a tight decider.

Defending champion Ding Junhui will play Stuart Bingham in the other semi-final.

Home hope Ding, the world number three, did not look back after taking the first two frames against Graeme Dott, going on to win 5-2.

Bingham defeated Alan McManus 5-1. The Scot briefly levelled the match but was largely on the back foot, with Bingham's break of 114 in frame five the highlight of the contest.

Meanwhile, next month's world-ranking event Indian Open in Mumbai has been postponed, with the original dates of 13-17 October 2014 postponed to 10-14 March 2015 due to a state election. 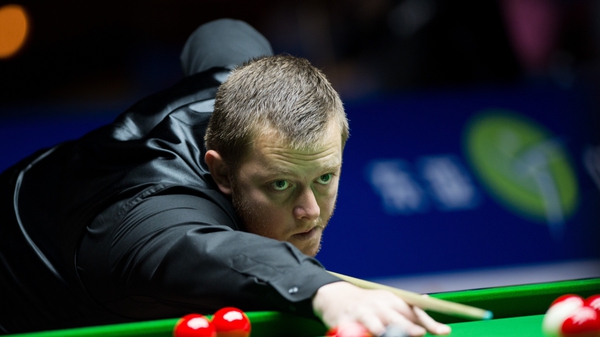