Neil Robertson had tears in his eyes after becoming only the eighth player to complete snooker's triple crown.

The Australian won the UK Championship at York's Barbican Centre on Sunday, beating Mark Selby 10-7 in the final to add to his 2010 World Championship and 2012 Masters titles.

And Robertson admits joining that group surpasses even his Crucible triumph as his greatest achievement in the sport.

"It's probably the most emotional I've ever been," he said. "That's the first time winning a tournament that I've actually had some tears in my eyes.

"To win all three... I get to join the really big boys now. That's really exciting, and to become the first overseas player as well.

"I'm just over the moon to win all three."

"Everyone was just in shock, it was like when Davis missed his against Taylor in '85" - Neil Robertson

For Robertson, the crucial black Selby missed in frame 16, allowing him to move within one frame of victory, brought back memories of the 1985 World Championship final.

Dennis Taylor beat Davis to that title 18-17, with the match finishing beyond midnight after the deciding frame lasted 68 minutes and came down to a battle on the final black.

Davis had over-cut his previous attempt, eliciting gasps from the crowd and a shocked "No!" from commentator Ted Lowe.

Robertson said of Selby's miss along the top cushion on Sunday: "It caught the near knuckle and I thought, 'hang on a minute'.

"Everyone was just in shock, it was like when Davis missed his against Taylor in '85."

Robertson played a rare right-handed shot to take the chance and said: "I just thought 'pot the bloody thing - don't get the long stuff out, just play it right-handed', and I played it right-handed and it went in.

"At 9-7 I was really confident, I got the one chance and potted a fantastic long red.

"From 5-1 to 5-3, that was really key. He would probably have been really disappointed with that but that's when I started making breaks."

A disappointed Selby admitted: "Neil thoroughly deserved to win. He played better in the match as a whole, and certainly second session he played better."

The world number two from Leicester at least has the memory of making snooker's 100th maximum break in his semi-final win over Ricky Walden.

"The money that comes with it (£59,000) is great but obviously the main thing is the history of making the 100th maximum." 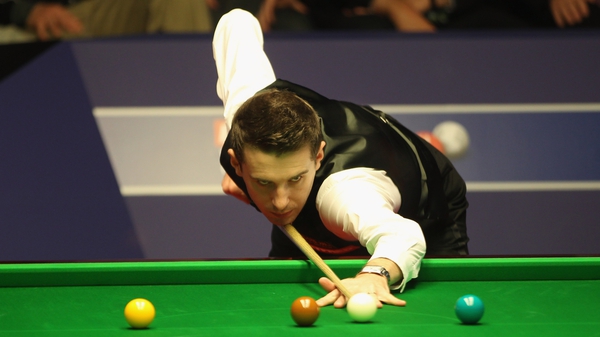