Reigning world champion Ronnie O'Sullivan played down his hopes of sweeping to a fifth UK Championship title despite beating Scotland's Marcus Campbell to reach the last 16.

The 'Rocket' struggled before the mid-session interval and lost frame two in unusual fashion, a long battle on the black ending when the Londoner failed to make contact with it.

"There are so many good players in this event. The danger is everyone thinking me, Ding and Neil are the hot favourites. I believe the winner could come from someone who's just about coming into form now.

"I'm not writing myself off, otherwise there's no point being here, I might as well pack up and throw a sicknote in.

"And I'm not writing off Ding's or Neil's chances, I'm just saying that the guys who have maybe not been getting the results, it's probably only a matter of time before they have their good spell."

Campbell, though, said of the reigning world champion: "His attitude's fantastic now and when he's like that, playing the right shots, he can make you look very ordinary."

After a scrappy start, successive breaks of 69 and a 96 saw Selby through to a clash with Graeme Dott.

And the Leicester player said: "I didn't really perform great but I finished the match off well.

"Playing Graeme tomorrow, I can't get off to a start like that. I've played him quite a few times and we've always had close games and gruelling matches, I'm sure tomorrow will be no different."

Ding Junhui's progress was almost as comfortable, the Chinese player beating Fergal O'Brien 6-1 to maintain his push for a fourth successive ranking title.

After struggling with his cue-ball control in the first two rounds, Ding was happier with conditions today.

"The side table has a new cloth put on so I felt better, more confident in the black-ball area," he said.

Ding won this title in 2005 and 2009 and is on pace to repeat the four-year cycle, but continuing his current hot streak would mean more to the world number three.

Stephen Hendry was the last player to win four ranking titles consecutively and Ding said: "That's the legend, no-one has done that since he did it so... I'll try!" 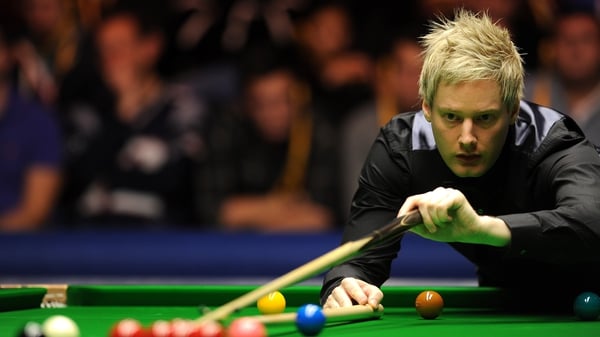