Ireland suffered their second loss of the TikTok Women's Six Nations after an error-strewn performance against France in Toulouse.

Having promised to put up a fight, Greg McWilliams’ side were unable to land a punch of any significance on their opponents.

And the first-half tally of 15 handling errors told its own story, with many of those mistakes coming under little pressure from the hosts.

The scrum went backwards and the lineout was a complete mess as France, who operate on a professional basis, wrapped up a bonus point in the first half.

The hosts added two more touchdowns in the second half with Eve Higgins’ try the only bright spot for Ireland on a harrowing day.

France were 3-0 up when Higgins looked to have got Ireland on the board in the ninth minute when finishing off under the posts after a lovely offload from Sam Monaghan.

However, the TMO interjected to rule it out after an off the ball tackle by Dorothy Wall.

Minutes after Eve Higgins has a try chalked off, Mélissande Llorens crosses in the corner to extend France's lead. #RTERugby #FRAvIRE #TikTokW6N

Within two minutes France had their opening try, wing Mélissande Llorens diving past Eimear Considine's tackle to score in the corner.

France scrum-half Laure Sansus snipes down the short side to score after a dominant scrum. Ireland trail 16-0. #RTERugby #FRAvIRE #TikTokW6N

Handling errors and the lack of platform continued to scupper Ireland’s hopes and France forwards Audrey Forlani and Clara Joyeux grabbed two more tries, both after TMO consultations, before the break to secure the bonus point.

The second half started with another handling error and Beibhinn Parsons, who had come on at the break, gave away a penalty for a high tackle.

Les Bleues kept up the pressure and Sansus swooped for her second eight minutes in.

That made it 33-0 and was followed by Ireland’s best spell of the game, which resulted in a super try from Higgins.

Ireland are on the board thanks to a superb team try, finished by Eve Higgins. #RTERugby #FRAvIRE #TikTokW6N

Almost every player got involved as the visitors worked the ball from their own 10 metre line into the opposition 22. Higgins sidestepped Sansus and ran in under the posts but Cronin missed the simple conversion.

Ireland, who had spoken about mixing up their open brand with more structured play in the build-up, continued to make life difficult for themselves and when Parsons knocked on close to her own line, France, who dominated the scrum, had a platform from which to send full-back Émilie Boulard, who was sin-binned for a high challenge on Higgins in added time, over for their sixth try.

Ireland's next game is against Italy in Musgrave Park on Sunday 10 April. 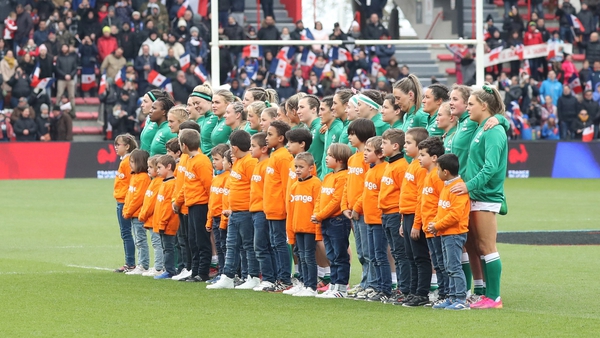