Andy Farrell's side were impressive winners over Japan, New Zealand and Argentina, while Wales will arrive in Dublin for their opening Guinness Six Nations gambit on 5 February missing a host of experienced names.

In addition, the visitors have not won in Dublin in the competition since 2012.

"Obviously, with the form Ireland showed in the autumn – how impressive they are – and we know how tough going to Dublin is. We haven’t had a huge amount of success there over the last few years.

"This tournament, in particular, hinges on momentum, really.

"If you get off to a good start, then everything seems to flow, camps become a lot happier and training becomes a lot easier. For us, it is really important to get a good start.

"If you can pick up an away win on the first weekend, then it sets you up really nicely. We have then got Scotland at home, which we know is going to be hugely difficult as well.

"The opening couple of weekends are pivotal to how the tournament will go for you, and we are hoping we can get off to a good start and use the 10 days or so we’ve got now to give ourselves the best chance in Dublin a week on Saturday." 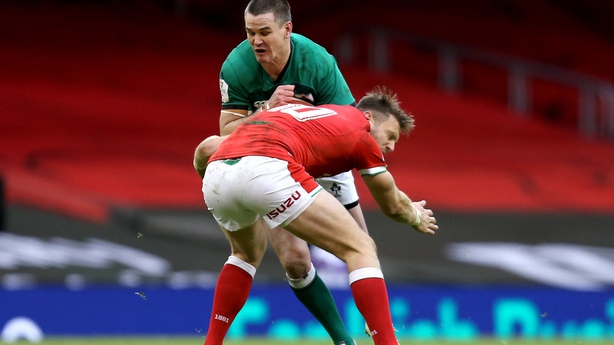 The Northampton fly-half also paid tribute to Ireland skipper Johnny Sexton, with the duo joking that referee Jaco Peyper may have his hands full with two such opinionated and vocal leaders on the Lansdowne Road pitch in 10 days' times.

"The respect for Johnny has been there from day one," said the 32-year-old.

"The way he came into the Ireland squad, it’s hard not to respect him - even if you don’t like him!

"But from my end, I’ve kept in touch with him from [the Lions tour in] 2017. You learn a lot more outside of a rugby environment and we get on really well.

"We’re similar characters. There’s a lot of similarities and that shows in the respect we have for each other.

"He’s operating at a high level at a decent age. He’s key for Ireland. If we sit off him, we’ll be in trouble."

Wales boss Wayne Pivac admitted that it is "a long-shot" that Alun Wyn Jones will play any part in this season's Six Nations.

But Pivac claims he would "never say never" as 36-year-old Jones continues his recovery from a shoulder injury.

Jones, who has played in a world record 161 Tests for Wales and the British and Irish Lions, has undergone two operations since he was hurt during the Autumn Nations Series opener against New Zealand in October.

He also had shoulder issues ahead of last summer’s Lions tour to South Africa, but he defied expectation and recovered in time to captain the tourists in all three Tests.

"Never say never. It’s Alun Wyn Jones," Pivac said. "I probably wouldn’t enter the conversation if it was anyone else, but the guy has broken so many records.

"I honestly say that I would never say never. But, look, it will be a long-shot, let’s just say that.

"Al is working incredibly hard behind the scenes, as you know he would, to get himself in the best shape possible for either the Ospreys or Wales."

Biggar added: "I don’t think any of us expected him to turn up in South Africa in the summer, and he managed to get on the plane.

"If there is anybody who has got a chance of being fit for some part of this tournament, then Al is probably the man. I wouldn’t rule it out just yet."