A late Maro Itoje try secured England victory over France in a Six Nations game full of high-speed, enterprising rugby at Twickenham on Saturday to leave the championship wide open.

England were trailing by four points heading towards full-time but Itoje bundled over from a ruck and was awarded the try by TMO Joy Neville after referee Andrew Brace initially ruled that it had been held up.

The first half was a wonderful display of high-skilled rugby with both sides committed to running the ball and keeping it alive.

France opened the scoring after two minutes with an Antoine Dupont try but England hit back with Anthony Watson's fourth of the championship and edged clear with Owen Farrell penalties before France fashioned a wonderful try for Damian Penaud to lead 17-13 at the break.

The second half was a tighter affair with a penalty apiece keeping it a four-point gap going into the final 25 minutes. But just as France seemed set for their first championship win at Twickenham since 2005, England found a way over, with Farrell also landing the awkward conversion.

The result was ideal for Wales, who top the standings on 19 points after their demolition of Italy in Rome and will be crowned champions with a Grand Slam should they triumph in Paris next week, regardless of what France do if and when they play their rearranged game against Scotland.

France and England have ten points. Ireland, who visit Scotland on Sunday, have seven, with the Scots on five. 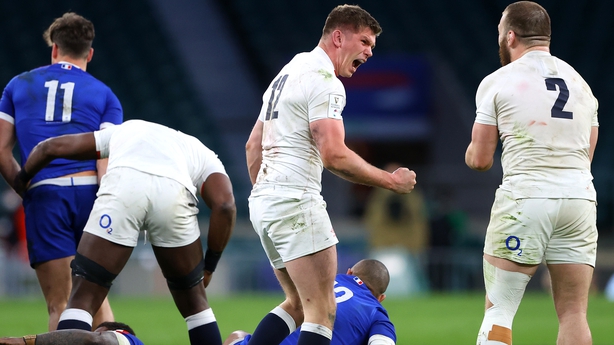 Man of the match Watson told ITV: "It was a great game to be involved with, credit to France, but it was a joy to be part of.

"Scoring a try in the last five minutes and controlling it at the end was the main thing. We are pretty happy with that."

France coach Fabien Galthie said: "In the second half we lost control of the game, especially at the end. We held our ground until Itoje scored his try.

"We did not spend enough time in their half after the break.

"They played it well (on Itoje's try). We couldn't flip him over. We had a great game but it was not enough."

The game began at 90mph and barely paused for breath – a wonderful antidote to much of the turgid action of last year and error-strewn opening weeks of the Six Nations. 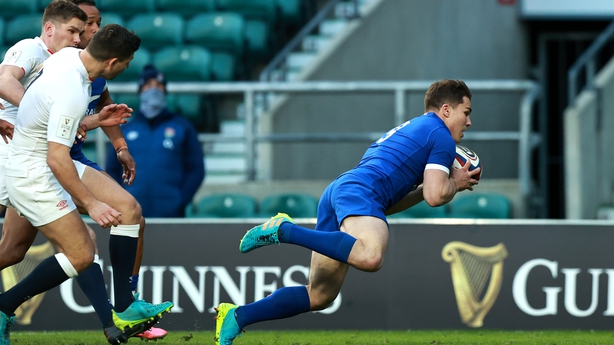 France were on the board with just over a minute gone as they kept the ball alive sevens-style before Teddy Thomas chipped a kick through that Dupont reached first.

England hit back strongly, also playing adventurous, exciting rugby that ended with Watson marking his 50th cap with his fourth try of the championship after ten minutes.

They continued to play at a pace not seen since the World Cup, earning two Farrell penalties while also addressing their own indiscipline, not giving away a penalty until a 25th-minute scrum offence.

France, however, were undaunted and continued to play the sort of high-paced adventurous rugby that has got their public so excited and they turned that into points with a try that would have thrilled the crowd, had there been one.

Throwing a lineout deep, the ball spun through the hands of Dupont and Gael Fickou to Matthieu Jalibert, who delayed his pass to wrong-foot the England defence and send Penaud over in the corner. 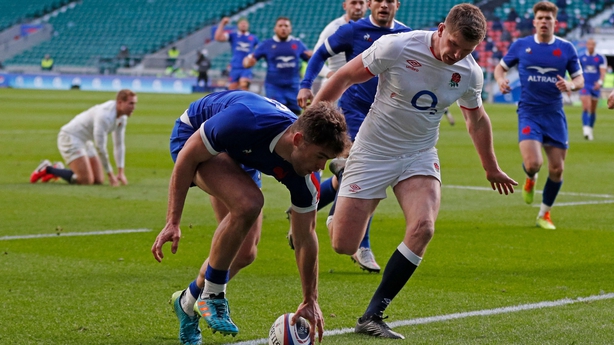 Jalibert converted to give France a 17-13 lead after one of the best halves at rugby Twickenham has seen for years.

The game settled into a more familiar tactical battle after the break but England wasted two well-created opportunities with breakdown penalties and then gifted France another three points with a third before Farrell slotted another to make it a four-point game heading into the final quarter.

France's defence was superb as England cranked up the pressure. However, it finally cracked as Ford drilled a touch-finding penalty within ten metres and, Itoje, the penalty villain in defeat by Wales two weeks ago, stuck out a telescopic arm and got enough of the grass on the ball for the TMO to rule it a try despite Thomas' heroic effort to hold it up.