Ryan, 24, has won 32 caps since make his debut in 2017, and is widely tipped to make the Lions squad, at least, when the next tour to South Africa, scheduled for this summer, takes place.

O’Connell soldiered in the second row for Ireland and the Lions for 13 years and finished up with 115 caps to his name.

The Limerick man, as Ireland forwards coach, now gets a chance to work closely alongside Leinster's Ryan, who captained Ireland during the Autumn Nations Cup, and backs him to improve with experience.

"He's an incredible player, a world-class player I think but there's probably loads of growth left in him," said O’Connell ahead of Ireland's Guinness Six Nations opener against Wales in Cardiff on Sunday.

Paul O'Connell took his time deciding to take up Andy Farrell's @irishrugby job offer but is now back in the fold #RTERugby #RTESport #WALvIRE pic.twitter.com/QZVeymnpAb

"You look even at [Munster, Ireland and Lions flanker] Peter O'Mahony at the moment and I think his experience of different coaching styles, being on a Lions tour, working with Joe [Schmidt], working with Rassie Erasmus, working with Steve Larkham and Johann van Graan now, he's played with a lot of great players, his experience is really telling now in how he plays.

"I don't think he's physically any different. I think it's the same for James.

"James is a fantastic player. He's got an incredible work-ethic, as a ball-carrier he's top class, his maul defence is top class and as he gathers experience and experiences different coaches, that will be the icing on the cake for his game.

"He's in there with a group of second rows who are all very different in their own way, they do different things and challenge each other in different ways.

"They're all making each other better but there isn't a lot you can add to James Ryan physically in terms of his size, his fitness, but as his knowledge of the game grows and his experience grows, he's only going to get better as a player." 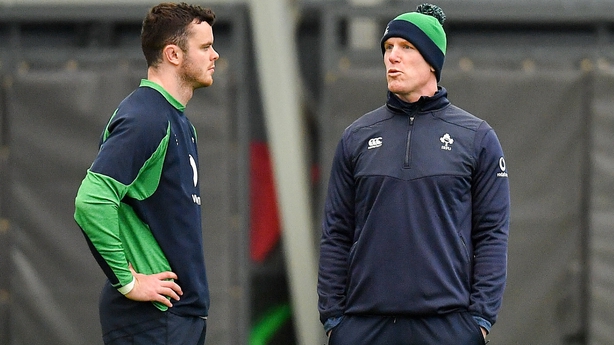 O’Connell, who captained the Lions in 2009, enjoys legendary status within Irish rugby but doesn’t feel that his presence will distract any of the current crop.

"Look, most of them I know a long time," he blushed when the question of his aura came up.

"I don't think they look at me like that. They probably say nice things in the media because they have to.

"Andy [Farrell] picks the team but we're involved in selecting Irish players to wear an Irish jersey, that is a pretty big responsibility for me.

"I think the players will appreciate that and I just have to be as honest as I can with them, I have to be constructive in my relationships with them and in my feedback with them.

"That's what they want. They don't want anything else.

"Any one of the players, and there are a few that I don't know particularly well here, any preconceived notions they have of me hopefully won't last long once they get to know me."

Follow Wales v Ireland (kick-off 3pm) on Sunday via our live blog on RTE.ie and the News app or listen live on RTÉ Radio 1's Sunday Sport. Highlights on Against the Head, Monday at 8.10pm on RTÉ2 and RTÉ Player.