Paul O'Connell says Andy Farrell’s job offer came as a surprise but the chance to return to the international rugby fold was just too good to turn down.

The former Ireland captain, who won 115 caps, including seven with the Lions, was appointed as forwards coach last month.

After his playing career came to an end in 2015, the Limerick man had a spell as an assistant coach with Stade Francais in 2018/19 and was in Ireland camp as a consultant last season.

The 41-year-old was also working as a pundit for BBC and had indicated that he wasn’t sold on the idea of a full-time coaching role.

However, when the call came from Farrell, who took over from Joe Schmidt following the World Cup in 2019, O’Connell felt the time was right.

"It probably did, yeah," replied O’Connell, when asked if the offer came as a surprise.

"I took a few weeks to think about it and decided it was the right thing for me to do.

"I feel I can offer value. I have an awful lot to learn, certainly as a coach but I felt I could immediately offer value to the coaching staff and the players and it’s a great opportunity.

Doris and Roux ruled out of Wales clash

"When you are in the middle of a tournament it’s full on.

"The big reason [for saying yes] is I felt I could offer value, my recent connection to playing... you could say it’s a weakness but I think it’s a strength as well.

"You are still clued in to what a player feels and how a player learns and how hard it can be to learn at times and to change a habit, so that was it. I was excited when he rang me and I think he’s got a really good environment here.

"The players enjoy it. I suppose there’s a very collaborative approach, which I would have seen when I was in with them last year, whenever I speak to the players.

"It’s a great environment to join and the opportunity excited me." 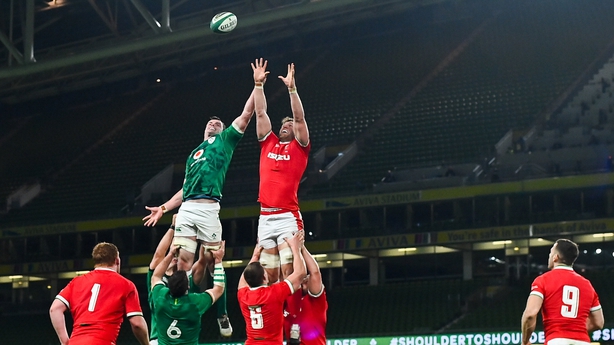 One of the areas which was highlighted for improvement in Farrell’s first year in charge was a misfiring lineout.

O’Connell is an expert in that field and feels that he can bring his influence to bear, starting with Sunday’s Guinness Six Nations opener against Wales in Cardiff.

"I certainly hope I’ll have an impact on the lineout but a big part of lineout is experience," he said.

"To be able to see pictures and have the feel of what’s going to happen before it happens. You need to be there a lot, you need to see it, you probably need to have a few bad days and learn from them.

"I think the Ireland lineout has been pretty good; there’s been a few high-profile losses right on the opposition line and they are very expensive.

"You can lose a lineout on the halfway that you haven’t had an amazing chance to score from but if you’ve a lineout five metres out it’s an important lineout.

"There has been high-profile losses for the lineout. It’s been a big learning curve for players. I would have gone through that as a player as well.

"You can do all the analysis and put all the systems in place, there is a feel and there is a bit of experience that allows you to see the pictures quickly so that’s important for the players.

"It’s an area I’ve an interest in, I’m familiar with the system that we would use. It’s evolved from when I’ve played but I suppose there are little bits and pieces in all the provinces that we steal and poach off each other.

"I’d like to think I can offer value there. It takes a bit of pressure off Simon, obviously, as well. That was a big part for me to be able to come in and know there’d be a good handover because he was moving to defence and you have that."

Meanwhile, the French rugby union (FFR) has been given the go-ahead for Les Bleus to partake in the tournament by the French government.

Following a briefing from the FFR and Six Nations, the French authorities are satisfied that improved Covid-19 protection measures are in place.

Fabien Galthie’s side face Italy in Rome on Saturday.

Follow Wales v Ireland (kick-off 3pm) on Sunday via our live blog on RTE.ie and the News app or listen live on RTÉ Radio 1's Sunday's Sport. Highlights on Against the Head, Monday at 8.10pm on RTÉ2 and RTÉ Player.