Some of Andy Farrell's selections for the upcoming Guinness Six Nations "make no sense" and leave the squad "lopsided", according to two former Ireland internationals.

Head coach Farrell named a 36-man panel for the tournament, which, for Ireland starts on 7 February away to Wales, on Monday. It includes the uncapped Munster scrum-half Craig Casey and Ulster prop Tom O’Toole.

He is one of five props – along with Dave Kilcoyne, Cian Healy, Tadhg Furlong and Andrew Porter – in the squad.

The make-up of front row was a source of bemusement for former Ireland hooker Bernard Jackman.

"The props selection makes no sense," he told the RTÉ Rugby podcast.

"Tom O'Toole is a player for the future but if he had to start tighthead in a game against Wales we'd be worried.

"He's going to be a great player but he's not really ready to play top European Cup rugby yet as a scrummager so I think he's in there for experience so effectively we've gone with four props, realistically who are proven at international level

"The fact that they are in a bubble does make it harder to move people in and out so I don't see why they would limit themselves to four and a half prop decisions." 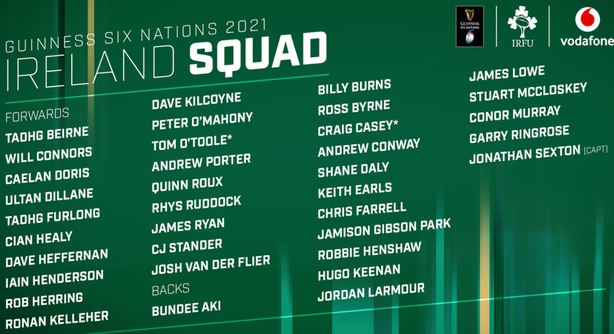 "It's a funny squad from the point of view that we've only named two looseheads, and one of those, Dave Kilcoyne, has played little or no rugby for the past couple of months," said Lenihan.

"If you consider Peter O'Mahony, who I think will start at 7, then we've three 7s as well. It's a little bit of a lopsided selection for me in a number of areas.

"Are we saying, by picking only two looseheads, one of which is Dave Kilcoyne, who certainly deserves a go, but if Cian Healy got injured in the first five minutes against Wales, has Dave Kilcoyne the gas to play 75 mins?

"There's talk about Andrew Porter covering, but bear in mind you've Tadhg Furlong on the tighthead side, who hasn't played since 23 February

"The workload that was placed on Andrew Porter right through the autumn series and for Leinster in their big games, if you then expecting him to cover loosehead as well, I think that's a massive gamble.

"There are a lot of issues I'd be concerned about with the squad."