Forwards coach Simon Easterby has hailed Ryan as an increasingly influential leader within the Ireland ranks, tipping the Leinster lock to set the standard for his side this weekend.

Ireland have beaten Les Bleus just 12 times in France, but two of those victories have come in the last seven years.

Former Ireland flanker Easterby endured several wretched defeats in Paris, but believes the new generation of men in green do not harbour any of those Gallic ghosts of yesteryear.

FRANCE v IRELAND: ALL YOU NEED TO KNOW

"James Ryan sets incredibly high standards for himself and for others," said Easterby.

"Some of the games we've won, he has come off the pitch and still been hugely disappointed in some aspects, because he has incredibly high standards.

"He's developed himself, and around others, into becoming a really strong, integral part of our team, as a leader both in what he says but more importantly in what he does.

"And I think it's a compliment to James that all the players want to follow him in everything he does.

"He has taken on responsibility with both Leinster and us, and he's taken it in his stride.

"There's not many places that he'd fear going to, and that's the mark of the man himself, that he's a young man in age but he's able to deliver.

"At a young age, he's certainly going in the right direction and he's someone that everyone wants to follow into battle."

Beat France with a try bonus-point this weekend and Ireland will claim their fourth Six Nations title in seven years, and their first under new head coach Andy Farrell.

Easterby believes Ireland will cope with an empty Stade de France given the continued coronavirus shutout on fans, insisting the visitors will put aside all thoughts of that try bonus in order to stand a chance of victory.

"The crowd would have been unique, that's been my experience," said Easterby.

"And it will be unique then for the players to experience them not being there. 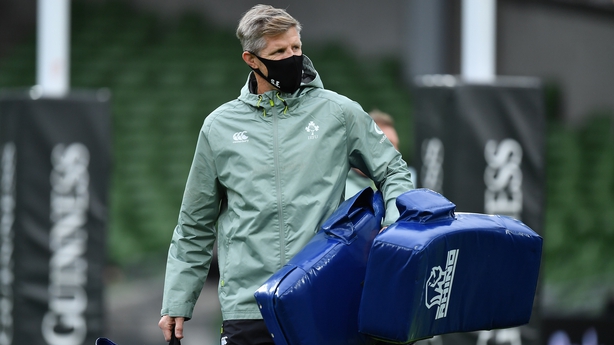 "But there will also be players that won't have been there before. And they won't have any hang-ups about the Stade de France.

"It's clearly an impressive place, and when we arrived there today, the players that hadn't been there before took it all in. But there shouldn't be a fear factor going there.

"Because a lot of them haven't had the kind of experiences I might have had as a player at certain times.

"It just presents a cracking opportunity for us tomorrow to go and express ourselves and win a game of rugby.

"And then off the back of that if we need to get certain things out of the game we'll obviously have to do that. But what an opportunity the Super Saturday is set up so nicely.

"It's taken seven or eight months to get to this point for us, but after the performance last weekend and the work the players have put in this week to get ourselves into this position, I can't wait to see them go out and perform tomorrow.

"If you go chasing things then often that can be a distraction, so we must start the game well, we must take opportunities when they arise.

"Coming to Paris and getting a win is something that Irish teams haven't had huge success with in the last 20 years.

"But we saw in 2018 that we stayed in the game and we were able to win the game late on.

"That may well not be the case tomorrow, it may be that the game opens up a bit.

"So we have to focus on winning the game first, then after that we reassess probably at half-time on how the game's going.

"The players have full licence to make good decisions on the pitch, and at the right times Johnny (Sexton) and the other leaders will do that."

Follow France v Ireland (8.05pm Saturday) with our live blog on RTÉ Sport Online and the RTÉ News app or listen to live commentary on Saturday Sport on RTÉ Radio 1.