Adam Griggs prefers to admire the likes of England and France than lament the fact that their rivals can spend more time improving their craft than his Ireland charges.

The Red Roses, who beat Ireland 27-0 two weeks ago, went professional in 2019 and are strong favourites to claim their second Six Nations Grand Slam in a row if and when the fixture against Italy, postponed due to the coronavirus, gets played.

France are currently semi-pro but have plans to follow England's lead next season.

And the Ireland Women head coach, whose side have won two from three games to date, says the standards that the England team set are something that benefits the sport. 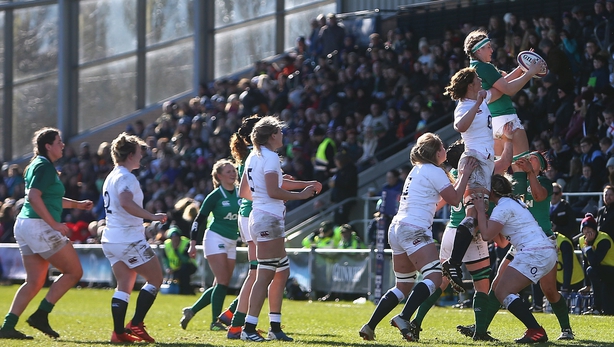 "It's interesting because I wouldn’t say so much it’s the resources available because everything we do with our players, especially at the High Performance Centre, is of a professional calibre," Griggs told the RTÉ Rugby podcast.

"The one thing we just don’t get enough of is time.

"That’s where you see the English and French teams progressing because they have that time together.

"When we get four or five days together we do make improvements.

"It’s good that England and France are leading the way on that side of things because I think that very quickly you’ll see, even in my couple of seasons in the women’s game, the actual level of the game has increased year on year.

"And the more the product, I suppose, impresses, the more people will come to see it and hopefully that helps drive everything forward."

As it stands, Ireland's next game is away to France on 15 March in Lille.

You can listen to the full interview with Adam Griggs below.