Stephen Ferris says Jacob Stockdale needs to work harder during games and has warned that his scintillating form in 2018 won't protect him from the axe.

The Ulster winger, 23, burst onto the international scene in the summer of 2017 and scored 11 tries in his first nine Tests, including seven during Ireland’s Grand Slam run the following spring.

The Lisburn man also scored the only try in Ireland’s first ever home win against New Zealand at the end of 2018.

But he has only managed to cross the line twice in his last 11 games, a brace in a World Cup warm-up tie against Wales.

The 21-year-old was also at fault for England’s second try during the 24-12 defeat two weeks ago, loitering without intent under a kick over the top from which Elliot Daly scored. 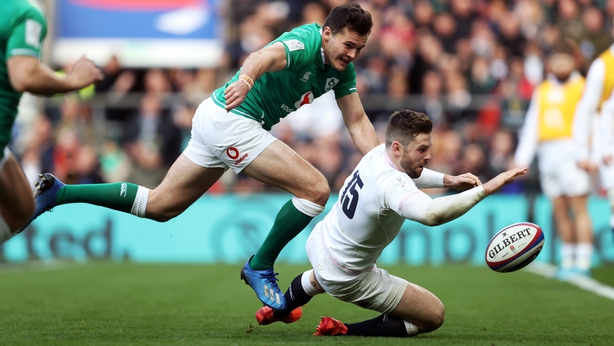 Ferris, speaking on the RTÉ Rugby podcast, was concerned that an error like that might damage his confidence, especially after a barren scoring spell.

"I think because he’s such a young kid it might affect him differently than it would affect someone like Johnny Sexton [if he] makes a mistake in a match," said Ferris, who won 35 Ireland caps.

"Johnny can hopefully just brush it off and get back to where we all know he can be whereas somebody like Stockdale it might take him a little bit longer.

"The worrying thing with Jacob Stockdale is that he doesn’t seem to want to get involved in matches, he isn’t going looking for the ball.

"It might seem silly to say but I would use somebody like Jack Nowell [England and Exeter] as an example.

"When he is not getting into the game, if the conditions aren’t great, all of a sudden he’ll just pop up at a ruck and give his team a bit of momentum, get his hands on the ball, just get a little bit busier."

Andy Farrell’s side were due to host Italy this weekend but that game was postponed due to the coronavirus meaning that Ireland's next game, as it stands, will come against France in Paris on 14 March.

Andrew Conway, on the other wing, has been prominent in the games so far, while Keith Earls, who appeared as a replacement against Wales and England, will be pushing for a start.

Dave Kearney, who has not been in a match-day squad this campaign, scored a hat-trick for Leinster at the weekend and is training with Ireland.

"Stockdale just seems to be drifting out of games and that hasn’t just been for the last couple of games," Ferris, who played with Ulster for nine years, added.

"For me, that’s been for the last six months so I think his position is under threat for sure.

"He needs to get back to the Stockdale that we saw in 2018 because there are lads champing at the bit to take him down a peg or two."