Caelan Doris will make his international debut on Saturday after being named in Andy Farrell's first Ireland selection for their Guinness Six Nations opener against Scotland.

The 21-year-old Leinster player will line out at number 8 having impressed for the unbeaten province, scoring three tries in 10 appearances this season.

In total there are five changes from the side which was beaten 46-14 by New Zealand in the World Cup quarter-final in October, with Leinster's Jordan Larmour named at full-back in place of Rob Kearney, and Ulster's Rob Herring taking over from retired captain Rory Best at hooker.

There is also likely to be a debut for Ronan Kelleher, who is named on the bench as cover for Herring.

"We've been pretty open with a clean slate as far as selection is concerned," Farrell, speaking from their training camp in Portugal, told Irish Rugby TV.

"They’ve been great, the young kids are ready to go.

"Caelan is super-excited, and Ronan is coming back from injury, but he’s been back in and done absolutely everything with us so far in this camp. He’s looking very solid as well." 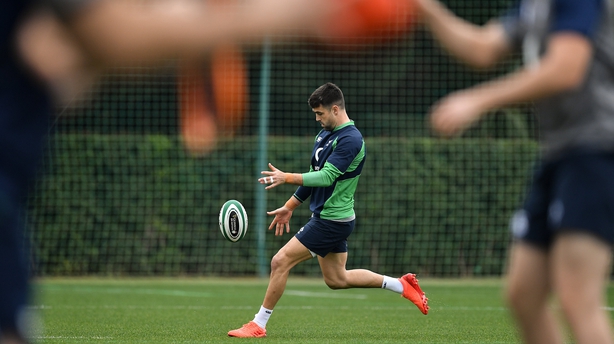 Conor Murray, despite pressure from in-form John Cooney, holds on to the scrum-half berth, where he will play inside captain Johnny Sexton, who has been out of action since suffering a knee injury on Champions Cup duty with Leinster in December.

"It's unbelievably tough," said Farrell on the scrum-half selection.

"Luke McGrath misses out and he’s been playing really well.

"We’ve had three really competitive training sessions here and Luke’s been right up there, but somebody’s got to miss out.

"Conor’s been great, in and around the group, his training, his calmness under pressure in training over here and that’s been great for the group and he’s in good form as well.

"Everyone knows what type of form [John] is in, but he’s had a few protocols as far as his HIA is concerned, but he’s got a couple of sessions under his belt and he’s ready to go."

Jacob Stockdale keeps his place on the left wing, with Andrew Conway on the other side. 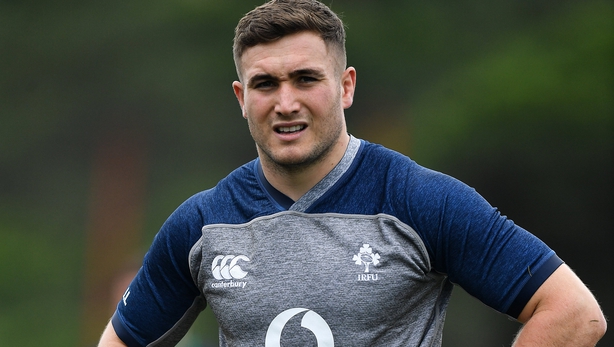 Larmour had come into camp with a foot injury but came through unscathed.

"We looked after him at the beginning of the week, he hit all his markers, he's been on fire, he’s back to his electric best," added the former Wigan Warriors captain.

Herring, who will win his ninth cap, will have the experience of Cian Healy and Tadhg Furlong on either side, while Iain Henderson will parter James Ryan in the second row.

With Mayo-born Doris at the back of the pack, Munster's CJ Stander moves to blindside flanker at the expense of Peter O’Mahony. Josh van der Flier retains his position at 7. 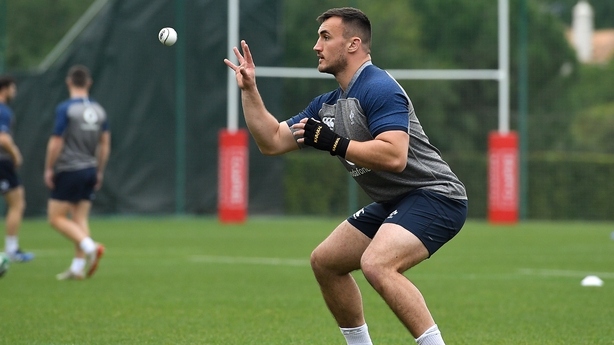 Kelleher, who has recovered from a hand injury, is named in the squad for the first time, while Dave Kilcoyne and Andrew Porter are the other front row options on the bench.

Devin Toner and O’Mahony are held in reserve to cover the second and back rows respectively.

Asked how O'Mahony, who has 64 caps, reacted to the news that he would start on the bench, Farrell said: "Pete typifies our group. He's been sensational since I gave him the news yesterday. He comes from good stock, he's been brought up in the right way.

"Straight after I told him he was on the bench, he was the first guy at the computers helping other lads to know their jobs."

Cooney, long-listed for European player of the year along with Ringrose, Larmour and Furlong, is also on the bench.

Ross Byrne and Robbie Henshaw are the other backs replacements.

Keith Earls hadn't trained fully with the squad and Will Addison had some "up and down days", according to Farrell when asked about injuries.

Ireland, under Joe Schmidt, last met Scotland in their opening World Cup match in Japan in September and recorded a 27-3 win.

Gregor Townsend’s side, who are without talisman Finn Russell due to a discipline issue, last beat Ireland in 2017 but have not won in Dublin since 2010.