Garry Ringrose won’t rush back for the Italy clash as he continues to recover from a hamstring strain.

The centre missed Ireland’s Guinness Six Nations win over Scotland on Saturday when Chris Farrell put in a solid showing in the 13 shirt.

After an opening-day defeat to England, who have accumulated 10 points from two games, Joe Schmidt and his side know that the championship is now out of their hands. 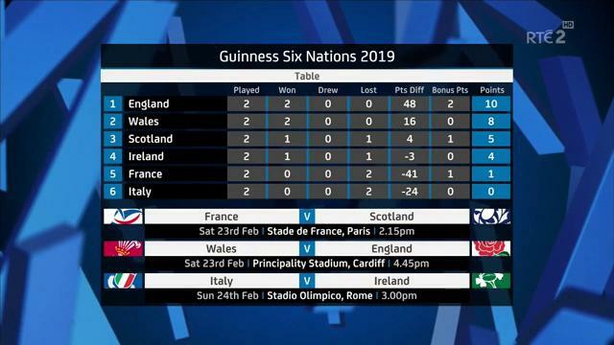 "I just got a little nick, a little strain in the game against England so we just didn’t want it to get any worse. Thankfully it wasn’t too bad," Ringrose, speaking at a Gillette event, told the RTÉ Rugby podcast.

"I’m just taking it day-by-day because I wouldn’t have ever had any soft-tissue [issues] before.

"It’s just being cautious and seeing how it responds. Certainly after the last 10 days it has responded really well, which is positive."

Asked if he was in the running for Ireland’s next assignment, the trip to Rome on Sunday week, the 24-year-old Leinster back said: "I don’t know, for me it’s just trying to get back and available for selection, and get back fit.

"But between competition and selection, and obviously how well Chris and Bundee [Aki] did at the weekend. That’s out of my control.

"For me it’s just to focus on getting back fit and whatever happens happens."

Should Ringrose not recover in time, Farrell, Robbie Henshaw, Tom Farrell, Jordan Larmour and Will Addison are among the other centre options for Schmidt.