Shane Horgan believes the key to victory for Ireland over Scotland lies in the back row, although noting that the Scots "could surprise everyone".

Ireland travel to Murrayfield for a tricky RBS 6 Nations opener on Saturday against a resurgent Scotland team, but expectations are high for Joe Schmidt's squad ahead of the 2.25pm kick-off.

Horgan says Ireland’s "power and ball carriers" can give them the platform for victory, but one which won’t come easy.

The former Ireland and Lions back told RTÉ Sport: “There are huge expectations for all six nations – maybe none more than Ireland.

“Expectations may have been dampened this week with the loss of Johnny Sexton at 10, but an able replacement comes in with Paddy Jackson.

“If Ireland can keep all their players on the pitch and keep the penalty count low then they should win - but if not, Scotland could surprise everyone”

“He’ll be up against a tough test though in Finn Russell, his opposite number, one of their best performers and certainly someone who can get a backline going.

“Russell in conjunction with Huw Jones, who has played really well in the centre for Scotland over the November internationals, it will be interesting to see how he goes up against Garry Ringrose.

“This is certainly a really tricky game for Ireland. One that maybe as fans we’re looking to with expectation, but maybe the players are looking with a little bit more trepidation.”

Beyond the battle at 10, Horgan believes the winning of the game for Ireland is in the options at back row and their ball-carrying abilities.

“I think if you take the number 10 situation out of it, that’s obviously going to be a key area.”

“But you’ve got to look to Ireland’s back row. There’s a huge amount of power and ball carriers.

“If you think Josh van der Flier, with the season that he’s had, not able to get in the team. No Peter O’Mahony either, another hugely influential player for Ireland over the last couple of years. 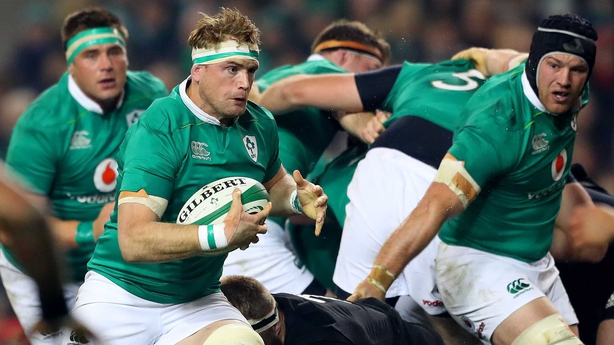 “But CJ Stander has been the best ball carrier for Ireland, or maybe anybody in the world, over the last six months.

“Jamie Heaslip is carrying very well and Sean O’Brien may be Ireland’s best carrier over the last five years – that gives Ireland a very strong platform to move forward from.

“Add on Iain Henderson who can carry the ball very strongly and is a phenomenal line-out option, I think it’s going to be like most games – won up front.”

When asked to predict the result, Horgan was cautious, saying: “I think it’s going to be more difficult than people expect.

“If Ireland can keep all their players on the pitch and keep the penalty count low then they should win - but if not, Scotland could surprise everyone.”

Live coverage of Scotland v Ireland in the Women’s Six Nations on RTÉ Two from 6.30pm (KO 6.35pm), with live radio updates and reaction on an extended 2FM Game On programme at 7pm.