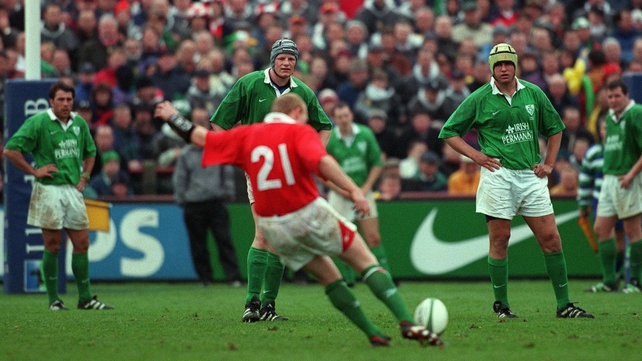 Out-half Ronan O’Gara slotted 14 points for Ireland but it wasn’t enough as Neil Jenkins secured a famous win for Wales at Lansdowne Road.

It was the first clash between these sides in the newly-named Six Nations, and the result ensured England were crowned champions of the inaugural tournament of the new millennium.

Wing Shane Horgan dotted down a second-half try for the hosts after Ireland had trailed 10-6 at half-time.

But Jenkins was sprung from the replacements bench, and he kicked two penalties to deny Ireland. The 23-year-old O’Gara, who was playing in his first Six Nations, gave Ireland an early advantage – he made it two from two off the tee as they took a 6-0 lead after ten minutes.

But Wales hit back, flanker Nathan Budgett forced his way across the whitewash after his side claimed a lineout deep inside the Ireland 22, and the subsequent conversion from Stephen Jones made it 7-6 to Wales.

Jones had earlier missed a penalty but he would go on to play a massive role for the visitors. And first he punished Ireland’s ill-discipline, to slot a penalty when they went off-side.

He missed another chance, but despite that, his side had a four-point lead at the interval.

Jones added to his personal tally on the resumption, when he spotted a gap in the Irish rearguard and darted through to touch down under the posts. His conversion pushed Wales 17-6 in front.

But Ireland came roaring back, and an O’Gara penalty reduced the arrears. And Ireland had their chances, before Horgan scored the crucial try for them. O’Gara’s conversion brought it back to the bare minimum.

Then another O’Gara penalty gave Ireland the lead before Jenkins arrived on the scene in the final quarter. He kicked two late efforts to steal the win for Wales. 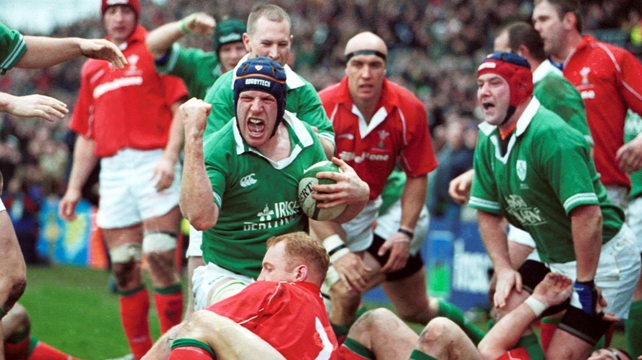 Impressive lock Paul O’Connell dotted down on his debut as Ireland cruised to a devastating six-try victory over Wales at Lansdowne Road on the opening day of the 2002 Six Nations.

The 22-year-old Munster second row, who only made his first start for the province that season, was forced off the field with a head knock. But prior to that he crashed over in the corner for Ireland’s second try on a day when everything went right for the hosts.

They had a huge 24-3 lead at half-time as Geordan Murphy and O’Connell bagged the first-half tries. The game opened up in the second-half, as did Wales, and Murphy doubled his tally. Denis Hickie, Keith Gleeson, on his first cap, and Ronan O’Gara also crossed.

Out-half David Humphreys was impressive as ever off the tee, and kicked 22 points of Ireland’s tally – opposite number Stephen Jones was the only scorer for Wales.

Ireland played with the elements at their back in the first-half, and took full advantage of their opportunities.

David Wallace and Humphreys combined to send Murphy over for the opener.

Humphreys converted and added two penalties to push Ireland into a 13-0 lead, before O’Connell scored his first try for Ireland. Humphreys missed the touchline conversion, but another couples of penalties saw his side well in charge at the break.

Wales had the strong breeze in the second-half but looked a beaten team with only a Stephen Jones penalty to show for their work in the first 40 minutes. And John Hayes, Peter Clohessy and Kevin Maggs were all involved as Murphy stretched Ireland’s lead further.

Humphreys converted and made it six penalties for him on the day as Ireland coasted into a 37-3 lead. Jones offered some resistance with a try and conversion. But Hickie, Gleeson and O’Gara completed the rout. 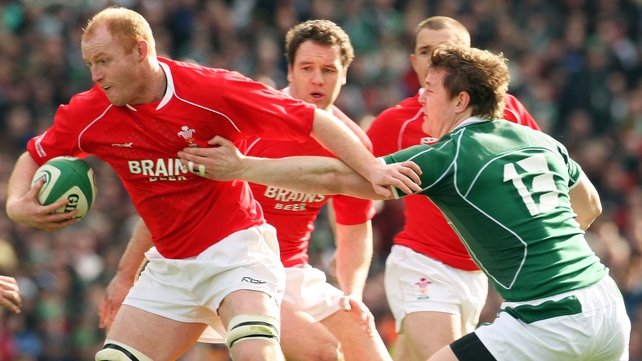 Munster out-half Ronan O’Gara kicked all of Ireland’s points but Shane Williams bagged the decisive try for Wales as they sealed the Triple Crown and resigned Ireland to their second defeat of the campaign at Croke Park.

Ireland held a slender 6-3 lead at the break as O’Gara and Llanelli No 10 Stephen Jones traded penalties. But it was the Ospreys speedster Williams who provided the killer blow 11 minutes into the second-half.

Ireland took an early lead when O’Gara first declined a kickable penalty, but then slotted an easier opportunity from in front of the posts to push his side ahead.

The hosts had all of the early territory but it was Wales who got the next chance, however Jones missed his first penalty of the championship. Tighthead John Hayes was pinged for binding at scrum-time but the Welsh out-half failed from tee.

O’Gara extended Ireland’s lead in the 19th minute, and Leinster winger Shane Horgan almost touched down, only for Mike Phillips to make a crucial intervention.

Then Jones got his side’s first points of the day, and full-back Lee Byrne also nearly went over in the corner. Wales began to turn the screw but Ireland held on for the 6-3 lead at half-time.

But Jones slotted a penalty to tie things up, and then in the 51st minute Welsh flyer Williams made it a record 40th Test try for him. He beat Andrew Trimble, and Rob Kearney to give his side the lead.

Jones’ conversion made it 13-6 but Martyn Williams became the second Welsh player to be sent to the bin when he was guilty of a foot-trip on Eoin Reddan – Mike Phillips was carded just before the break.

But Wales held on, despite two more O’Gara penalties, replacement James Hook secured the win, with a late penalty. 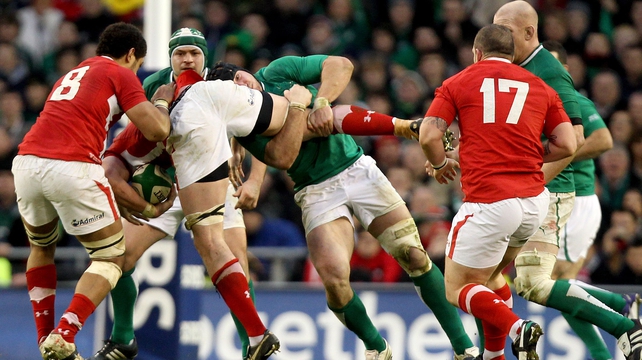 A late yellow card for Ireland flanker Stephen Ferris culminated in a last-gasp defeat to Wales in this Six Nations opener at the Aviva Stadium.

English referee Wayne Barnes adjudged that the 26-year-old Ulster back row had made a dangerous tackle on Ian Evans.

Ferris was sent to the bin leaving Leigh Halfpenny with the penalty opportunity, and he made up for his earlier missed conversion to put it between the posts.

Tommy Bowe and Rory Best had crossed the whitewash for Ireland. But Jonathan Davies dotted down a double for the visitors and George North also crossed as Wales only trailed by one into the dying minutes, before the late drama unfolded.

Ireland held a 10-5 half-time lead – Johnny Sexton kicked a fourth-minute penalty to give them the early advantage.

Ryan Jones was denied a try, as he was held up over the try-line, but their hard work paid off in the 14th minute. It was outside-centre Davies who crossed the whitewash to put his side in front.

But Priestland missed the extras, both he and Sexton also missed penalty opportunities but Ireland notched their first try before the break.

Andrew Trimble began a move, that involved Gordan D’Arcy who relayed to Bowe, and he sent Ulster team-mate, Best over.

It was a tonic score and came at the right time before the interval. Sexton added a penalty afterwards, and then Halfpenny assumed the kicking duties for Wales and slotted one of his own.

That brought the gap back to five before North played a big part in Davies’ second try. Halfpenny was unerring with the conversion, but Sexton kicked another Irish penalty.

Bradley Davies was sent to the bin for Wales, and Bowe pushed Ireland further clear with his try, but Sexton’s conversion went wide. And that was crucial as North bagged the late touchdown and Halfpenny made Ireland pay. 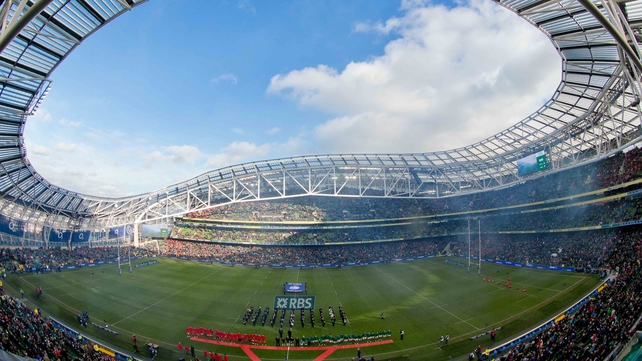 It was Wales’ first away defeat in the Six Nations since 2011 and was masterminded by coach Joe Schmidt and backed up on the field by a wonderful team performance.

Ireland, who had been downed by New Zealand in dramatic fashion during the autumn, defeated Scotland on the opening day of the Six Nations. And this result backed up that win emphatically.

The 28-year-old Johnny Sexton gave another standout display and he contributed 14 points of his side’s total as they out-thought their opponents.

The hosts were already 13-0 up at half-time and that was a sign of things to come as Wales could only muster a Leigh Halfpenny penalty for the entire 80 minutes – Ireland were 16-0 in charge before he got their solitary offering.

It was a stark contrast to two year’s previous as a couple of Sexton efforts gave Ireland a 6-0 lead after 17 minutes.

Openside Henry crossed the whitewash on the back of a customary maul orchestrated by forwards coach John Plumtree shortly after. Sexton added the conversion and Ireland were almost out of sight by half-time.

Sexton pushed Ireland further clear with his fourth success off the tee, six minutes into the second-half. Halfpenny reduced the margin to 13, but that was as close as Wales would get.

The Welsh full-back had beaten Ireland with a late penalty in 2012, but this time it was different. Another Sexton penalty on the hour ensured it was a much more comfortable finish for the hosts.

Jackson came on as a replacement and converted his own try as Ireland cruised to a 23-point win to continue to their impressive run of form under former Leinster boss Schmidt. 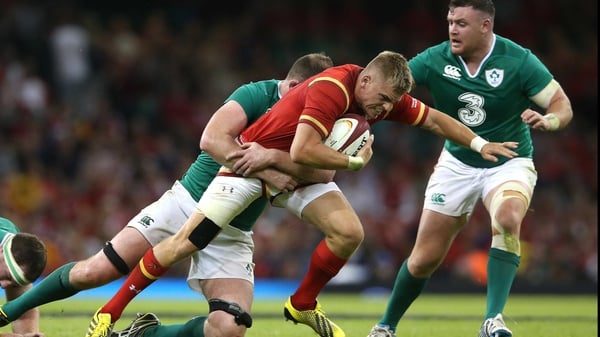